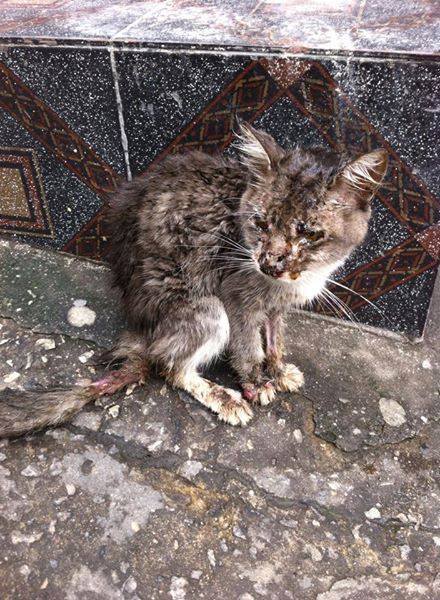 I have always had a soft spot for animals, dogs and cats. Especially cats since I was 7 years old,  I always had a unique relationship with them. For some reason, they always liked me. I think animals know who has a good heart. So when I saw this posting on facebook about "Davi", it really upset me. I dont like seeing animals in pain. A friend of mine posted on Facebook the top foto you see and I automatically wanted to do something.

Vanusa Martins who started this page for Davi, she found him close to where she lives in Rocinha. She lives close to me in an area called Cachopa, where she saw this cat who's fur was all matted and exposed parts of skin was showing. She was on her way to work when she took a box and put this cat in the box and brought him to a Pet Hospital in Copacabana. The name of the place is Caopacabana.

When Vanusa brought Davi in, The vet said that he was close to death and at risk. He was not eating so they are force feeding him through IV. He has two main problems, one is an infection of the Pancreas and the second is called Sporotrichosis and its a fungal infection that affects the skin. For more information on this read here.  Just looking at the fotos you can see the abrasions and skin exposure. In the favela contracting this is by coming in contact with soil, plants and decaying vegetation. The fungus can enter through cuts and scrapes on the skin. The fungus has eaten away badly at his tail so this might need to be amputated. So sad...

I saw that this cat obviously needed help. I wanted to see what I could do, if anything. This morning I had a dentist appointment planned but last minute the dentist called me and cancelled my appointment.  Before knowing about the cancellation, I left my house with 450 reais expecting to cover my teeth (about 300 reais) and then after going to visit Davi and contribute 150 reais to his care. Im far from rich but something about Davi, I don't know how to explain it but I saw suffering and wanted to help.

So I arrive at the dentist to find out my appointment has been cancelled. I wasn't happy as I have been trying to take more care of myself and these teeth I really need to get taken care of. So, kind of pissed off, I went off to see Davi. As I entered the pet shop/hospital I asked if I could see Davi. They told me to follow the assistant up stairs to the are where they keep the sick pets. I had to put booties over my shoes, obvious to prevent any germs from the outside affecting the animals. I got to his cage and saw this little Davi with his head down. I did not want to open the cage door as every place has their own way of doing things. The vet offered me gloves if I wanted to pet him. I passed on that as I just wanted to talk to him, look in his eyes and see if he still had "fight" in him.

I asked the vet what was wrong with him and she explained. I asked his condition, will he survive? She explained that he was weak but stable. He was being Iv fed as he could not eat on his own. They had just done exams on him two days ago so they were waiting for the results. The vet opened the cage and said if I wanted to take fotos of him that I could. I explained to her that I saw Davi's story on facebook and I wanted Vanusa to know that I was here to help. I spoke softly to Davi. He lifted his head and his eyes were clear, which is a good sign. I want this cat to survive. He is from the favela, like me. I want to help him if I can.

I spoke to Davi for about 10 minutes. He focused his eyes on me. I told him to fight and we will try to save him. I went down stairs to the place to pay and decided that Davi would get 400 reais today. I can always save again for another day to get my teeth fixed.
I want this cat to survive! 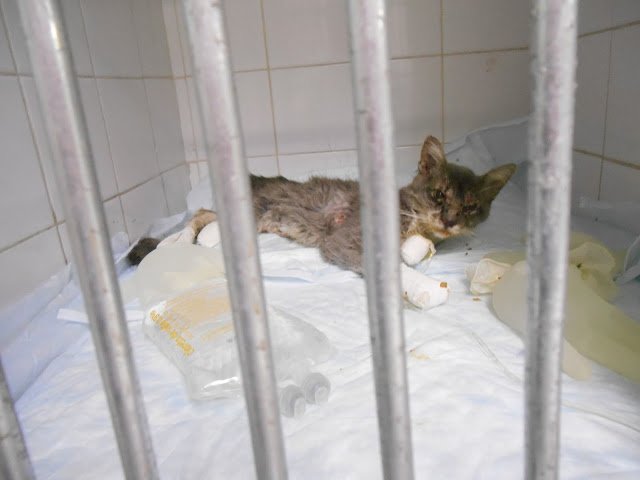 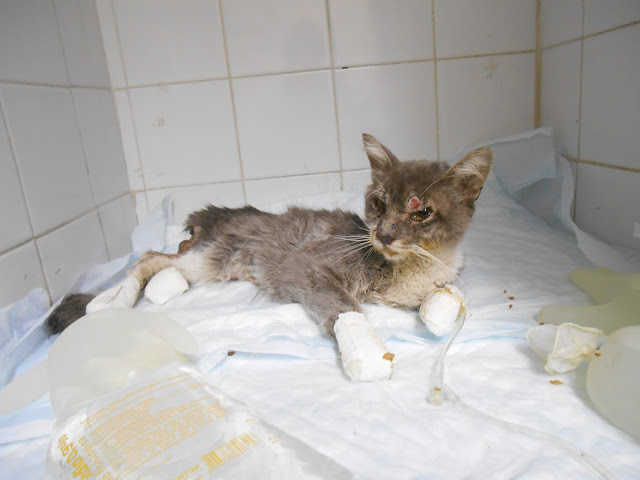 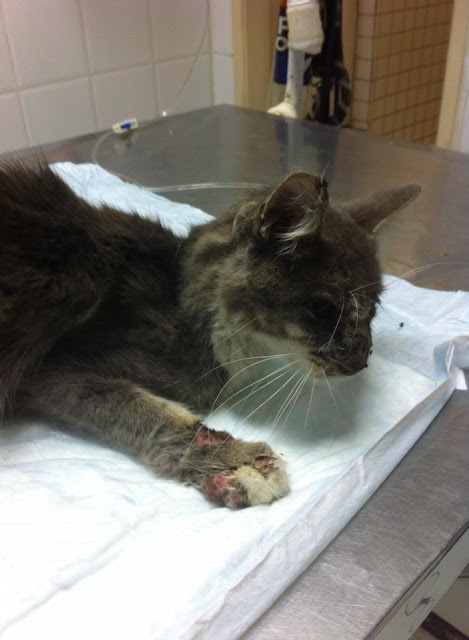 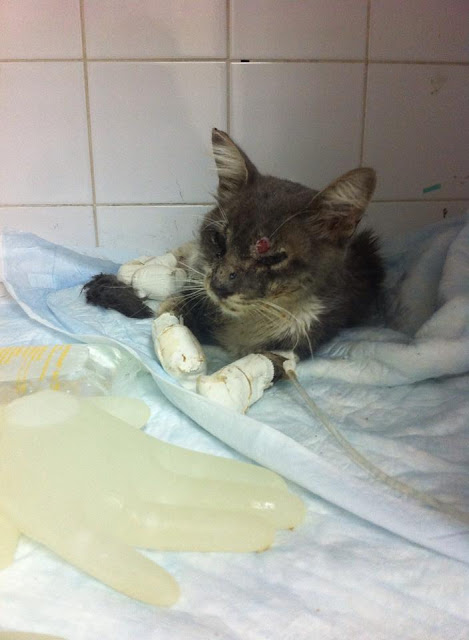 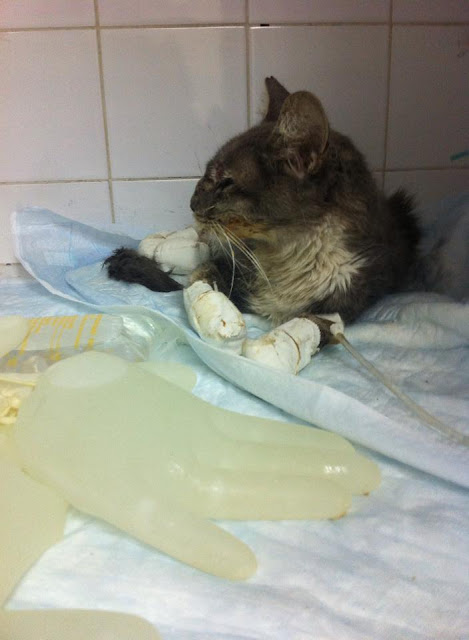 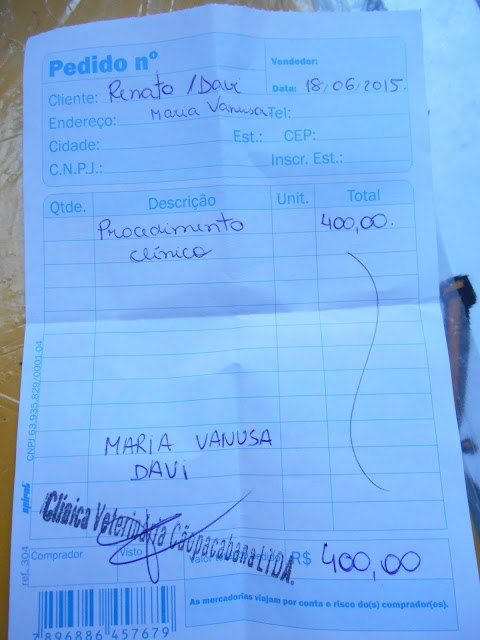 UPDATE: This poor cat after so much suffering has passed over the rainbow bridge. Such a sad story of how humans can be so uncaring to throw a cat out into the street to fend for itself. I am in tears right now for the poor cat. Things like this affect me because animals are innocent in this word. We as humans, supposedly more intelligent, destroy so much. But it was nice to be part of this and trying to help this cat. His suffering is over and now he is in Peace!
Posted by lifeinrocinha at 8:26 PM