Losing someone you love, I LOVE YOU FUZZY! 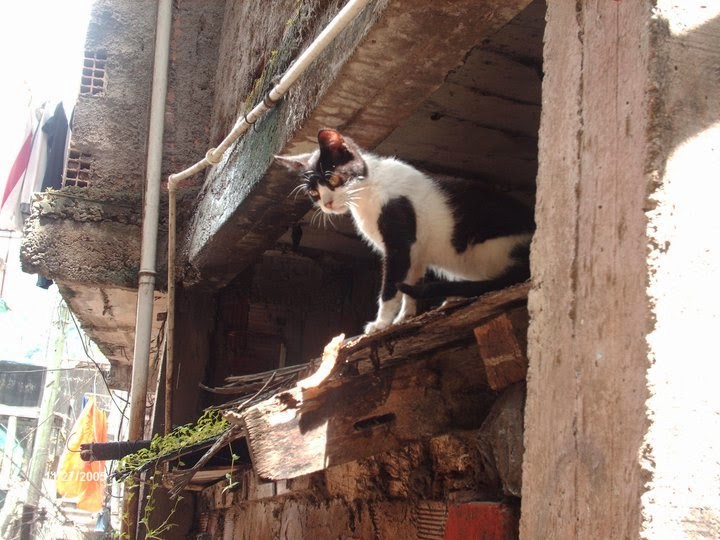 My little buddy who I found here living on this rooftop in March of 2010.


Its very difficult for me to even type this. For anybody that has ever had a pet you will understand this. To lose this pet is awful but for me to write about it I think will help for me to celebrate his memory.

I have always been more of a cat person. I like dogs but living in such tight spaces in a favela community, dogs would be difficult to have. I always had cats as they were easy to take care of and I liked that they also were more independant. I live a busy lifestyle and having to take a dog for a walk 3 times a day would be impossible.

In 2010 while walking down one of the tight alleyways this little black and white tuxedo cat about 3 months old came out to greet me. I thought wow, cute cat, really friendly and all, gave him some attention then moved on to my day. Soon after that, everyday I would walk down this alley way I would see this same cat. Again he would greet me and want me to scratch his ears and give him attention. At the time I didn't have any cats and never really thought about having one, even though I loved cats.

I started to think again about wanting a cat and this cat was on my mind. One day while walking through the alleyway I saw my little friend, stopped gave him his usual head scratch and a lady from across the alleyway came out of her door. I asked her if she knew if this cat had an owner. She said that the cat lived on the rooftop and people would often feed him and give him water. I told her that I love cats and maybe I could take him. She said "sure, take him and give him a good home". I told her I would think about it. So, I went home without taking him as I really had to think if I could do this. I didn't want to take a cat that I couldn't provide for.

About 1 week later I came back, I saw the lady and told her I wanted to take "Fuzzy" home. I came with a box and blanket to ease transport. Fuzzy was up on the rooftop and I couldn't reach him. So, one of the neighbors was able to help me to get him into the box. Once in the box I ran home, opened the box to his new home. For about 5 days straight, he would not leave my side, sleep by my pillow and never a meow from his mouth. He was finally "home"! And spoil him I did.

First order of business was to give him a bath. He had fleas and it took 3 baths to get rid of the fleas. Then I took him to the vet. During the visit, the doctor told me that he had a upper respiratory problem so breathing would be at times difficult for him. I noticed that he would play for about 30 seconds and his heart beat would be accelerated. I made a decision at that time that I would not do anything to accelerate his heart beat. So, I never played with him. He knew what he could handle so I left it to him. 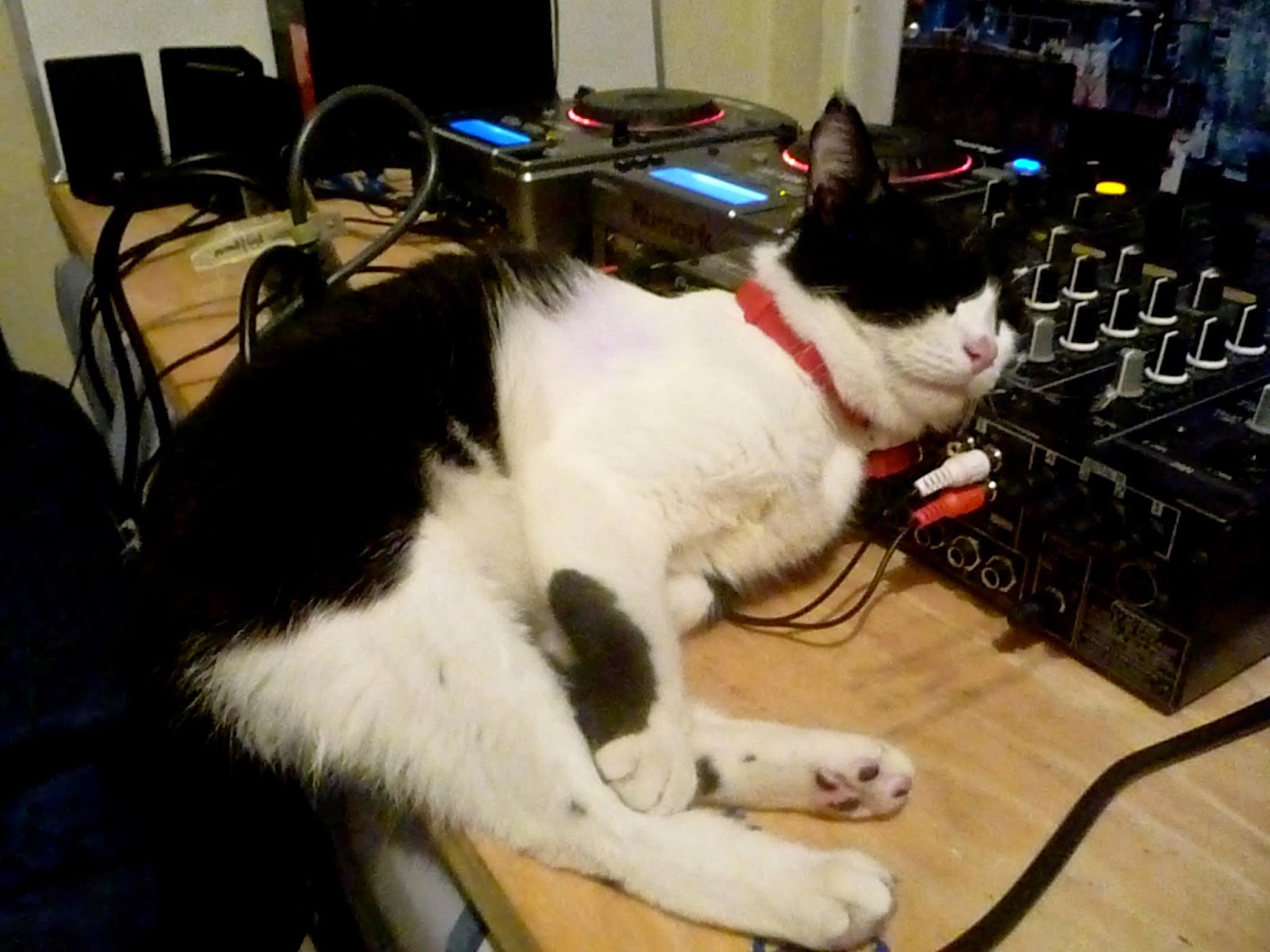 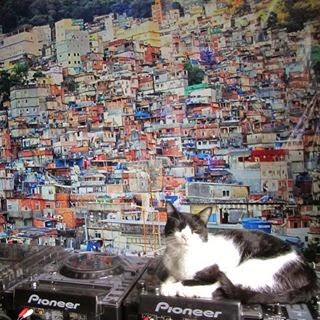 He was very affectionate and he loved people. His favorite thing to do was to sleep on top of the turn tables in our Dj School where the students would pet him and give him lots of love. He loved the dj school and music and students would always greet him.

From the first day I got him, he was always wanting cuddles. He loved being held and stroked. He was the most easy going cat I ever had. We used to call him "Bob Marley", because he appeared always in a really relaxed state as if he smoked a joint. A mouse could run in front of his face and he would not move.

At about 2 years old, he got sick, I took him to the vet. He had kidney problems so we went through a process of cleaning his kidneys and changing his food. He improved and was back to normal. After that I started doing more research on cats and health to make sure all 3 of my cats were fed well and taken care of. The vet recomended to change the food and I did for all the cats.

The beginning of his passing began late this past Thursday April 2nd night around 10:30pm. I heard a bang type sound coming from the dj school. I went to go check it out and found Fuzzy on the ground face down with his legs splayed outwards. I observed for a bit and just thought he was relaxing. I left the room and 5 minutes later I heard this meowing howling sound, so I went back in the dj school and saw him dragging his body across the floor with his front paws. His back legs appeared to be paralyzed. He was breathing heavy, accelerated heart beat and the pupils of his eyes were huge. After about 30 minutes he calmed down and seem to be stable but I still knew that he needed medical attention.

I immediately searched online for a 24 hours vet close by. I eventually was able to talk to one. She asked for his symptoms and I told her. She said to get him to a vet ASAP. Unfortunately I could not find a vet open as it was 11pm now. All I could do is try to comfort him, so I found him a spot away from the other cats. Immediately when I woke up yesterday (Friday April 3rd Good Friday), I left to take him to the vet. First vet is 50 steps from my front door result: closed, I walked down to another vet about 200 meters down the street, again: closed, So, I went outside Rocinha to another vet and again: closed! FUCK!!!!!!!!!!! Stupid religious holidays.. everything on not so "good" friday was CLOSED!! All I could do is again make him comfortable. He drank water and seemed to relax.

Around 10pm last night (Friday April 3rd) I got down on my stomach turned on my side facing him, and I put my head close to his about 1 foot away. I looked into his eyes and had a feeling that he would not last the night. I started to talk to him gently and his eyes responded. I could see that he was focused on me. I told him that it was ok if he had to go, and that I would miss him. I told how much he was such a cool cat and how I was lucky to have him. As I stroked his head, I started to cry. I told him how much I loved him and that I would miss him. I also told him that it really hurt me to see him suffer. I wanted to see him at peace!

As I got ready for bed, he dragged his body to my bed side and tried to pull himself up onto my bed. I felt awful as I know he wanted to be by my side. I did not want to pull him up because I know this kind of movement would put him in pain. The last thing I wanted to hear was my poor Fuzzy screaming out in pain. He dragged himself by my head but remained on the floor. I was in arms reach of him. After not being able to sleep the night before because of me worrying about him, I finally shut my eyes and off I slept.

During the night I heard Fuzzy moan in pain for about 2 or 3 minutes but I felt helpless. What could I do to ease this cats pain? This killed me hearing him cry.

The plan was today to take him to the vet at 9:30am as soon as it opened. I woke up to find Fuzzy not moving, not breathing and cold. I knew he was gone! I broke down and cried for what seemed to be like an hour. I sat and stroked his body, crying and apologizing for not being able to do more to help him.

I now have 2 cats left to give all my love. "Joy" and "Joao" know that Fuzzy has passed and are mourning their own way. Now today we will find a proper burial spot for Fuzzy. I know I can't do this. This is way too emotional for me. 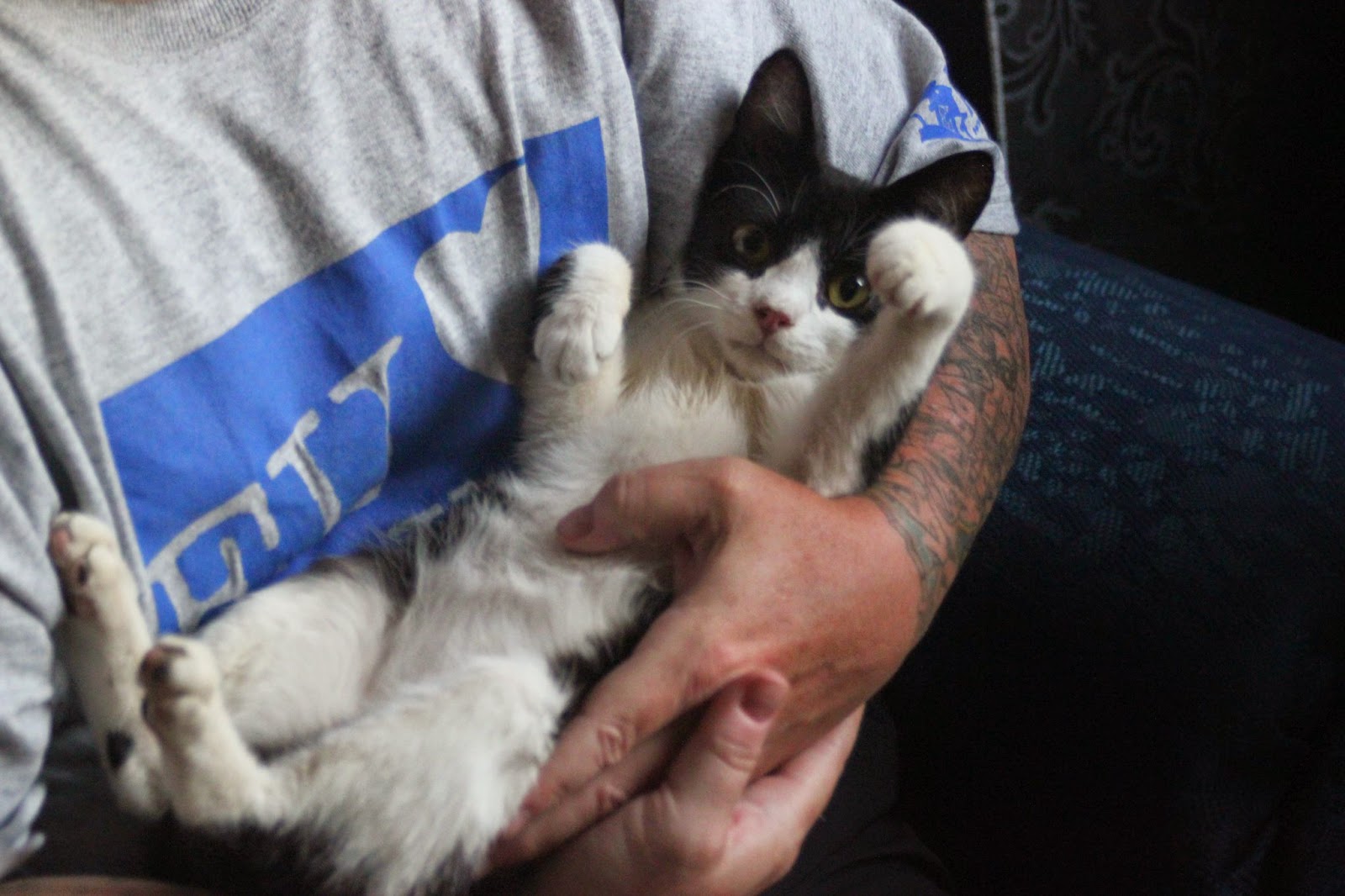 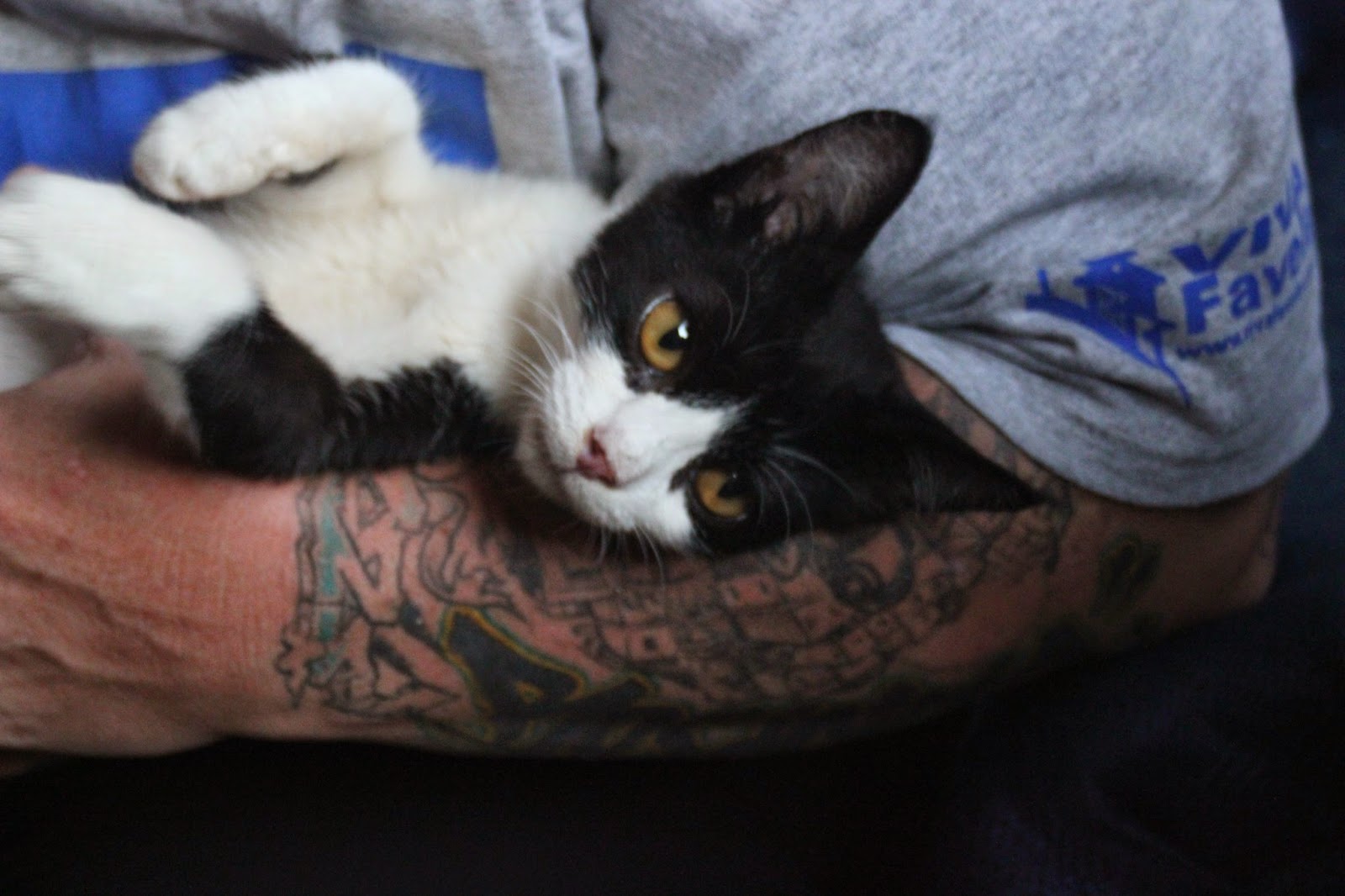 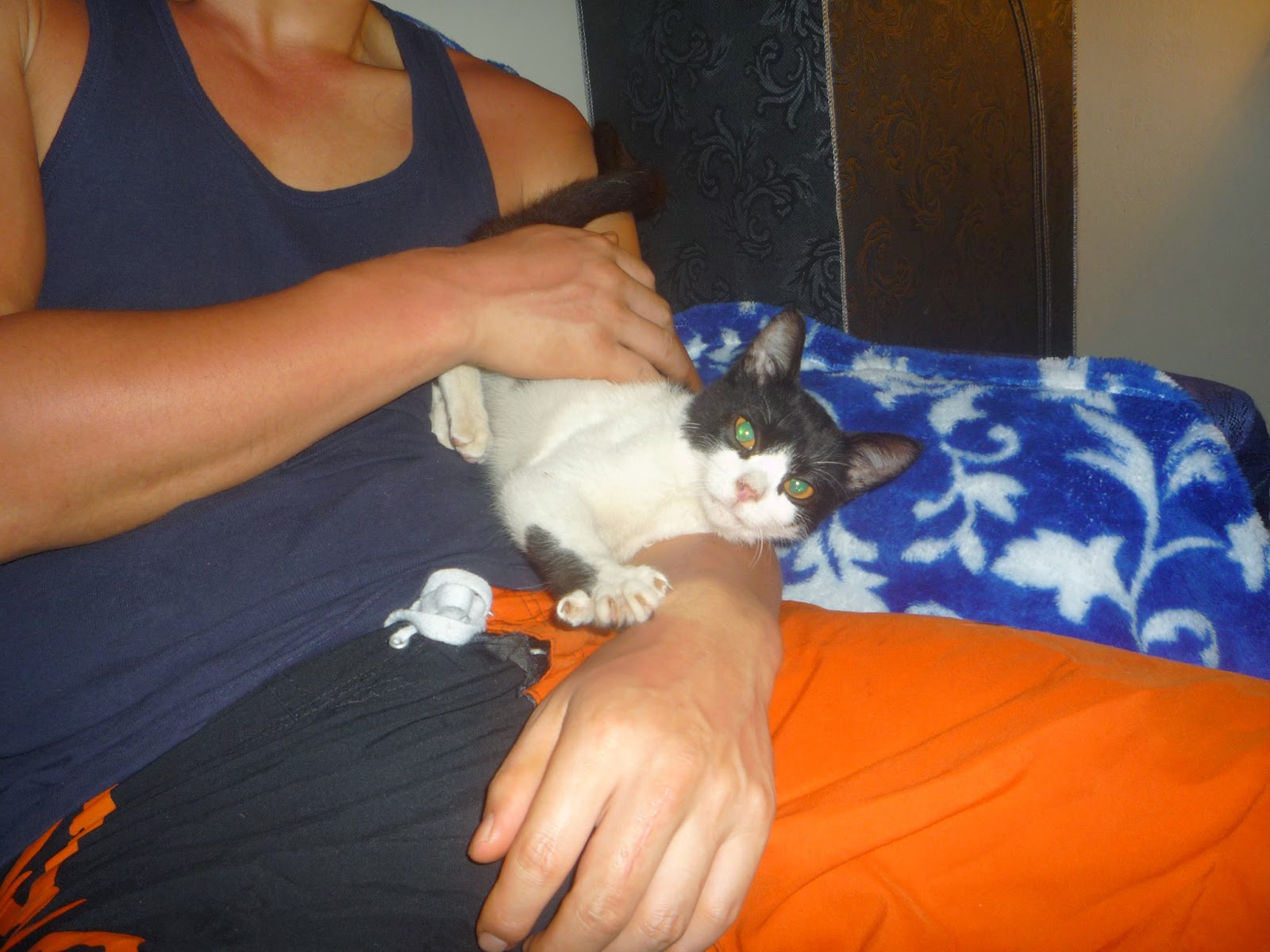 he always loves attention from anybody.. 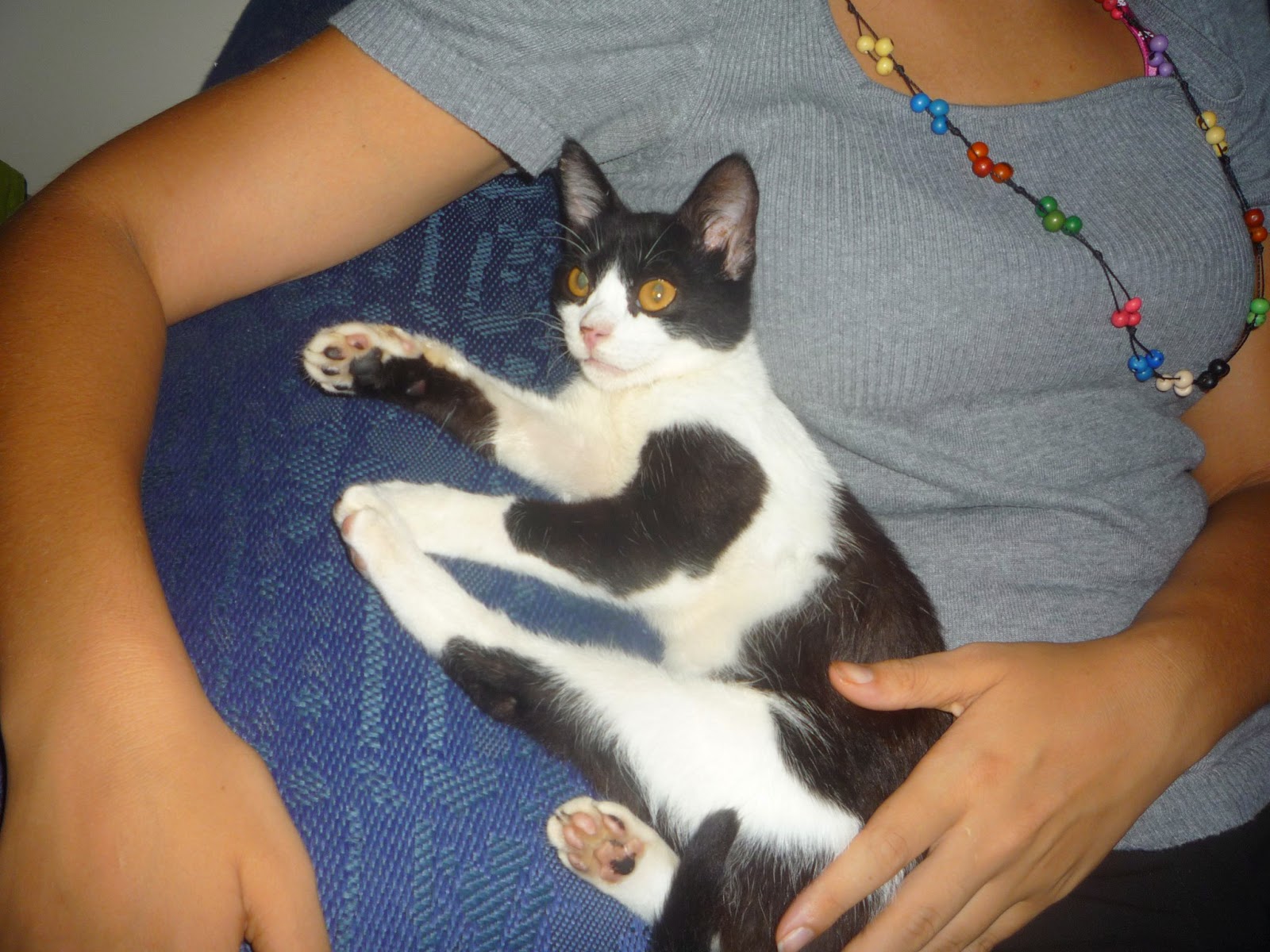 I will never forget my buddy, such a loving caring cat! 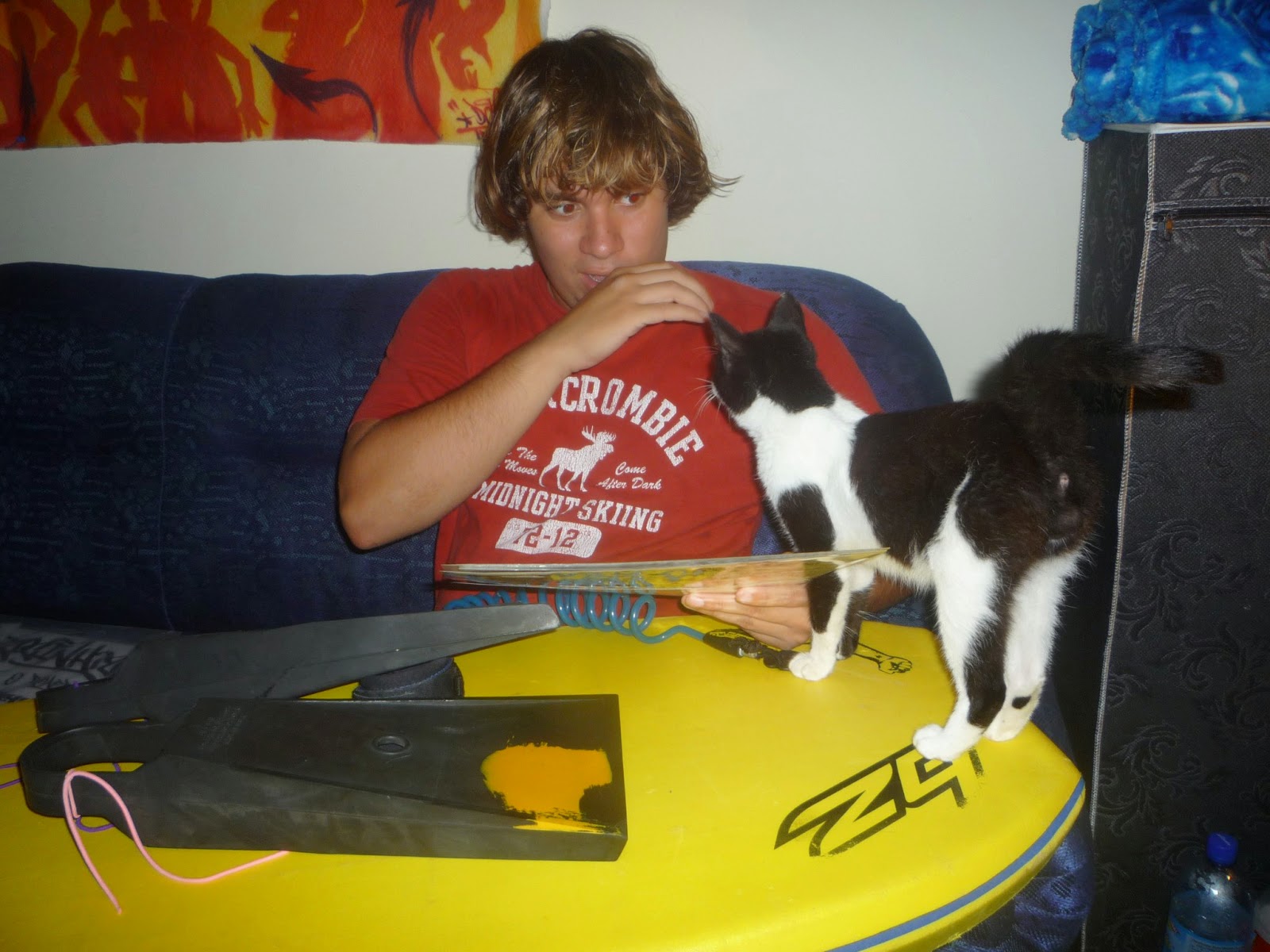 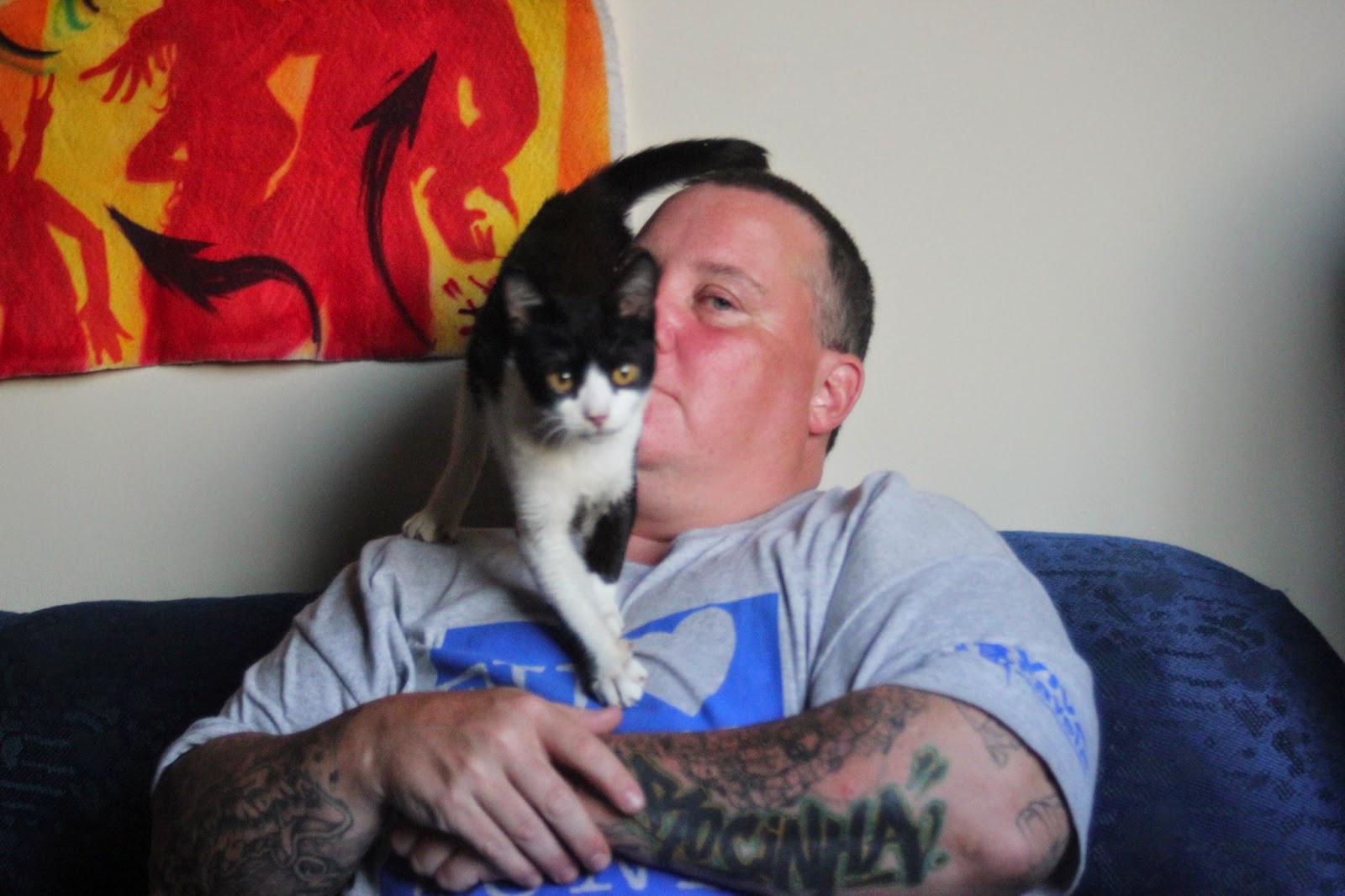 I let him "walk all over me" 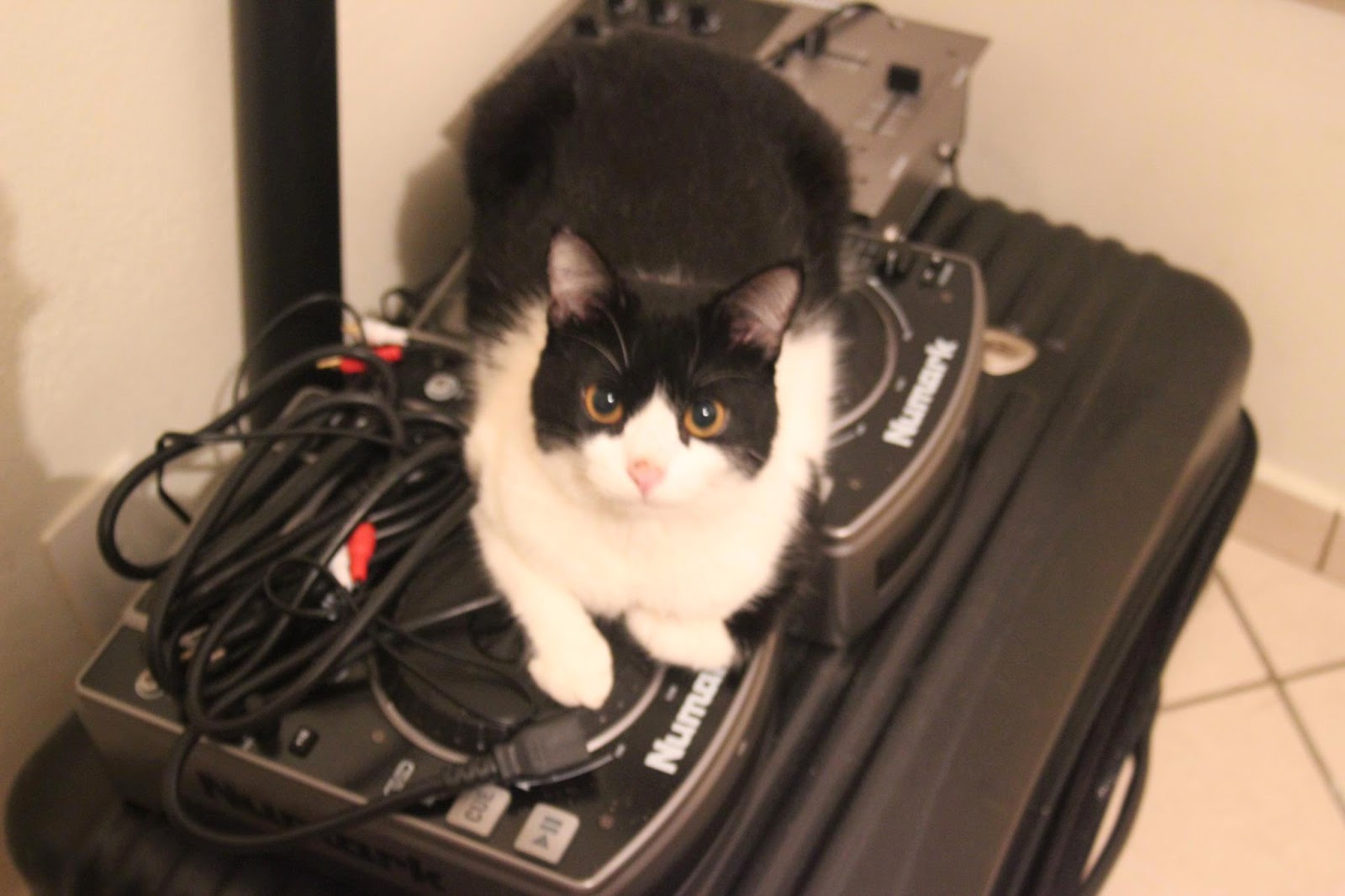 from the time we started the dj school, Fuzzy liked to hang out on the           equipment as if he is "keeping it warm" for somebody. 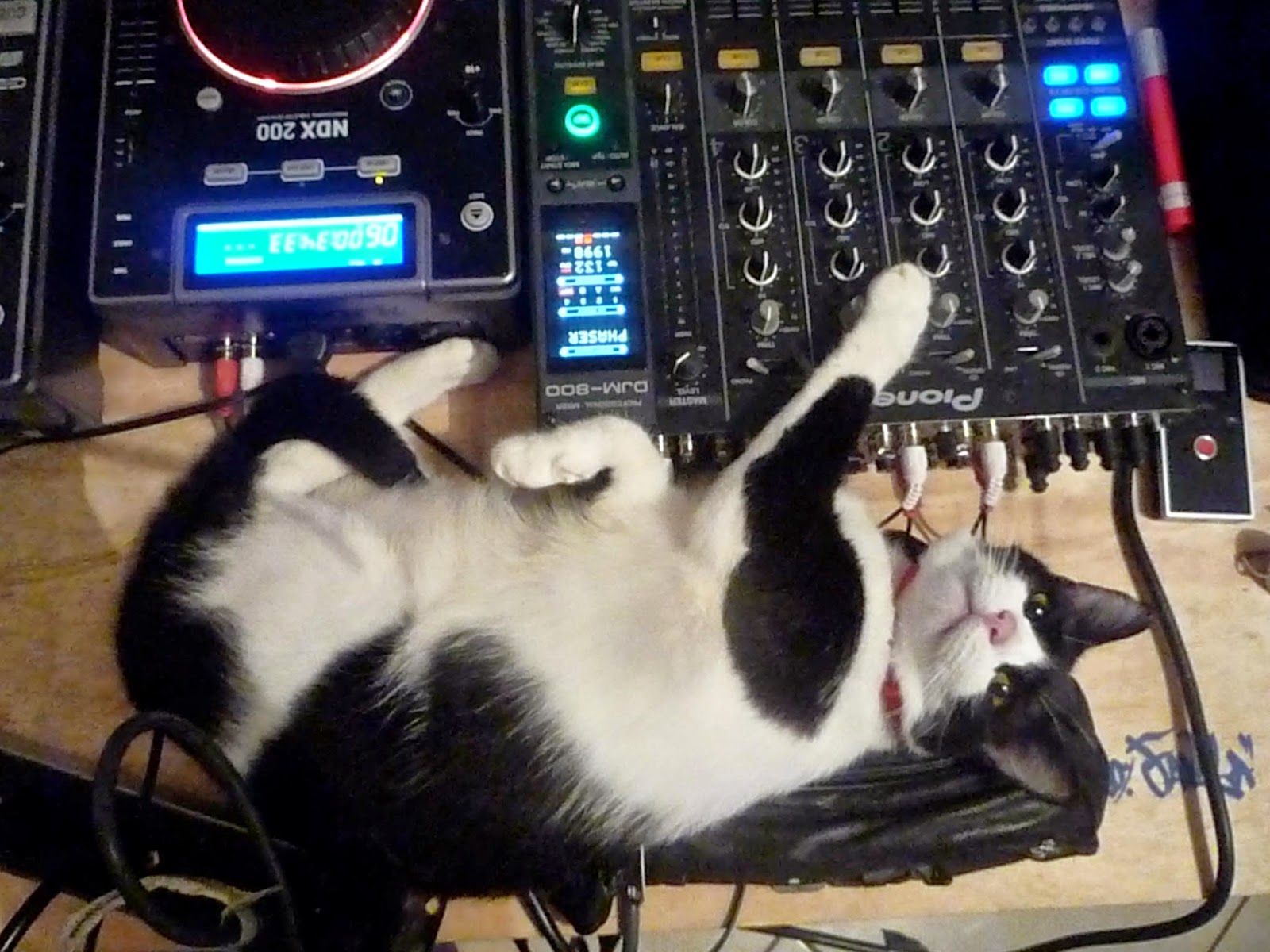 After a hard night of mixing! 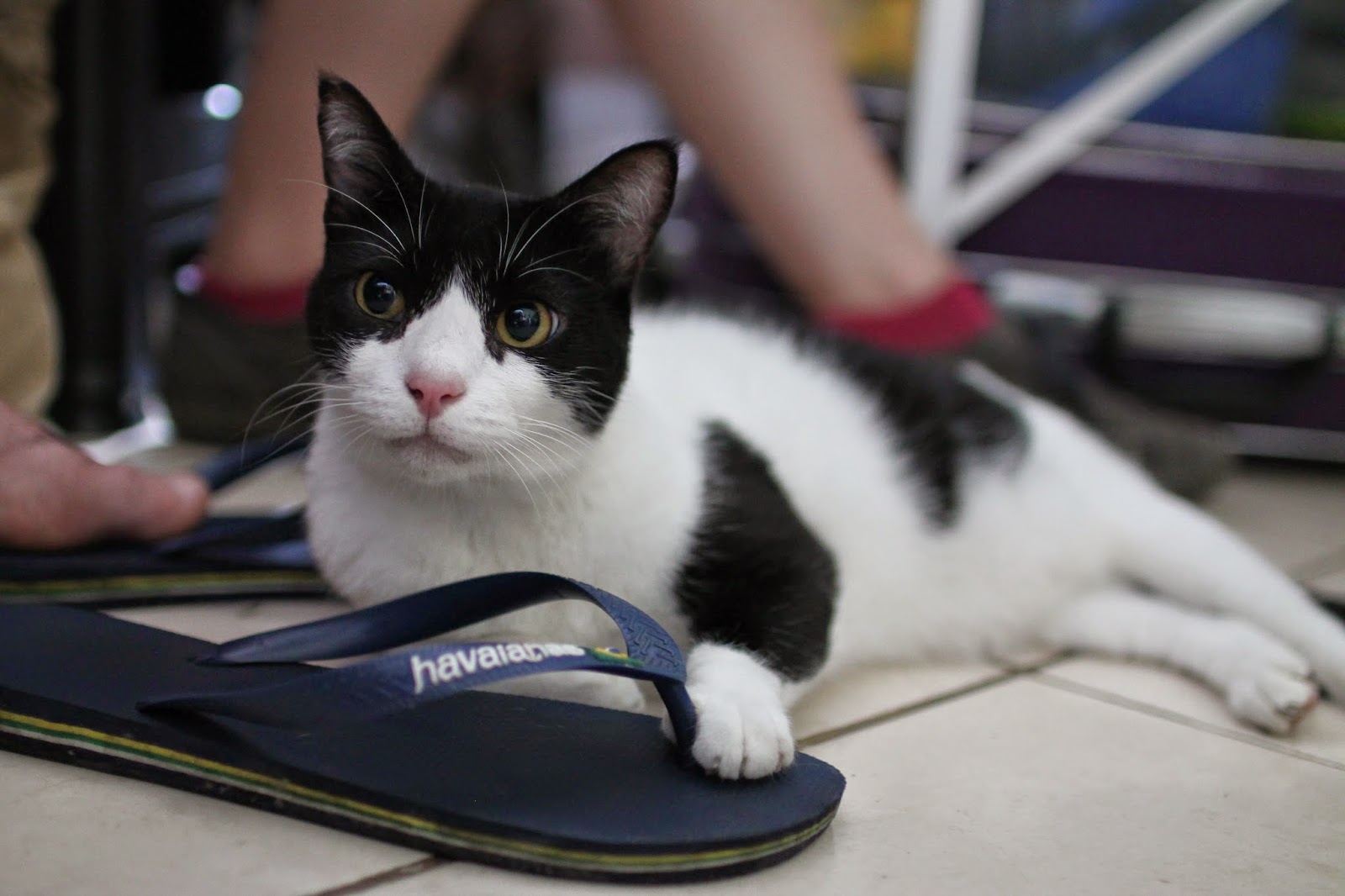 Visitors to our dj school loved him. He loved laying on people's sandals 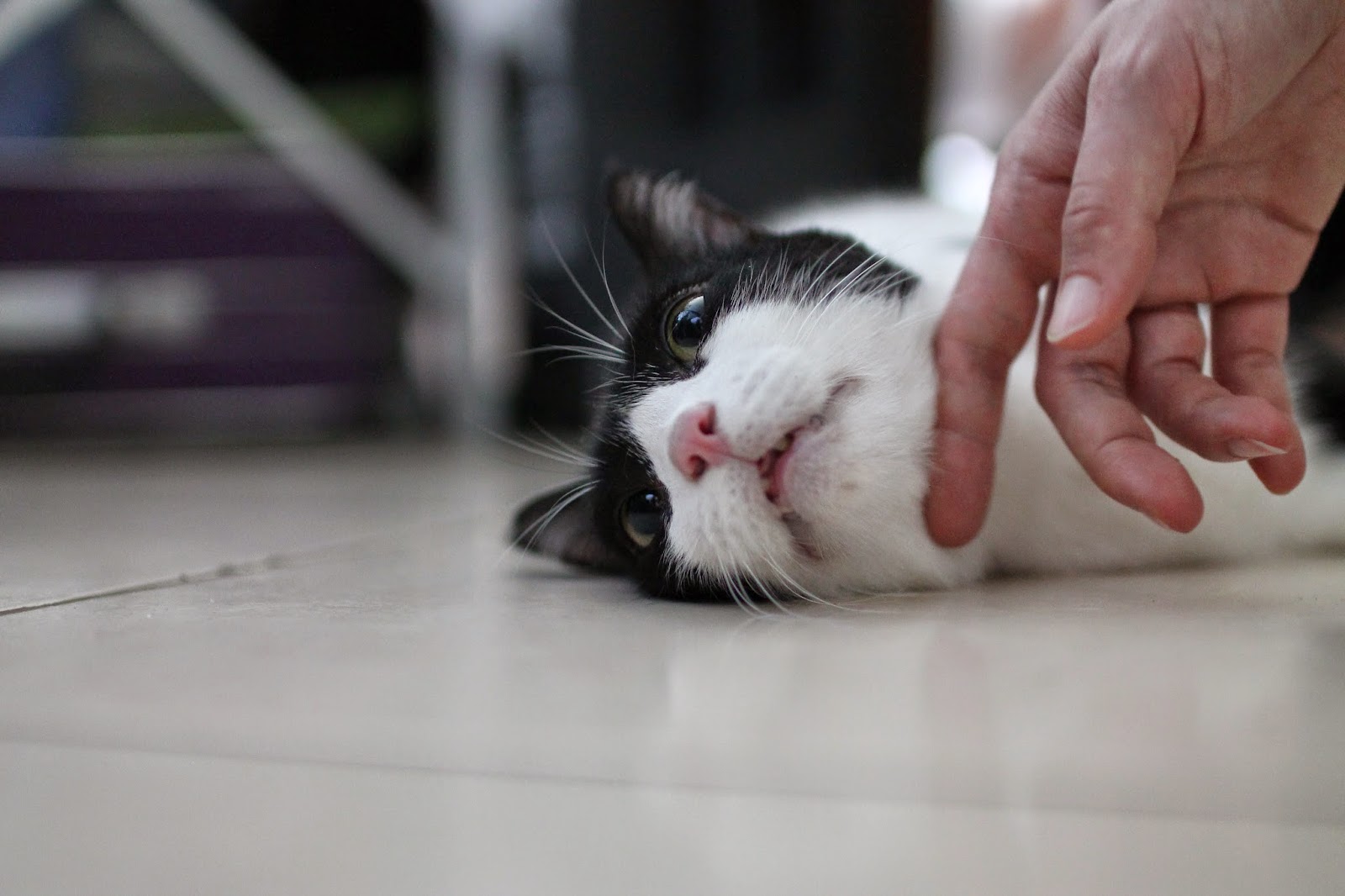 Always up for a chin rub! 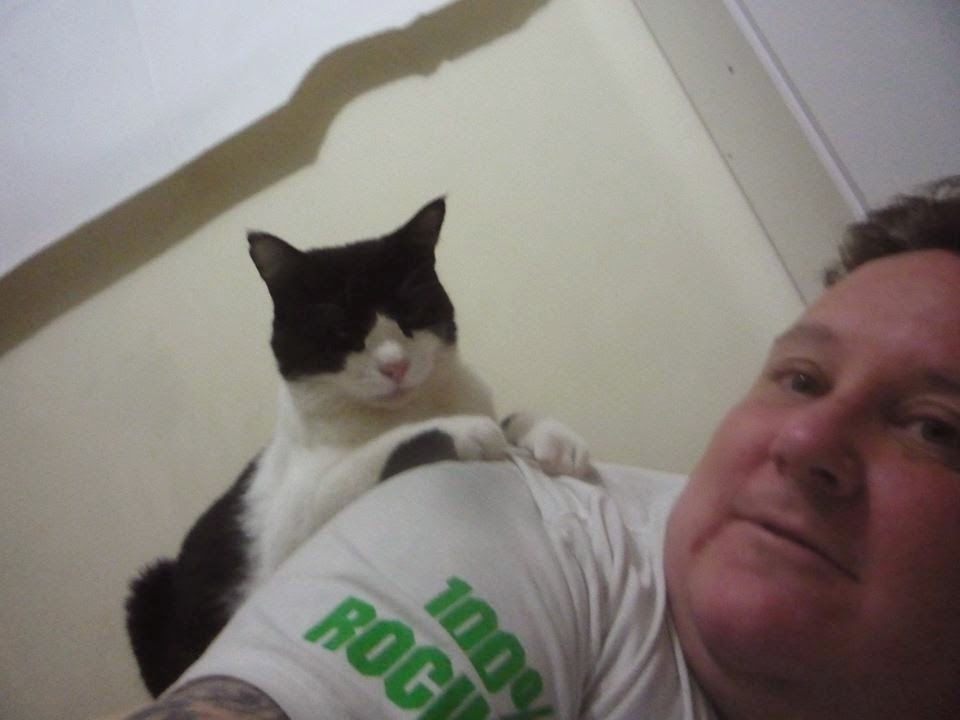 He liked sitting or hanging out on my shoulder 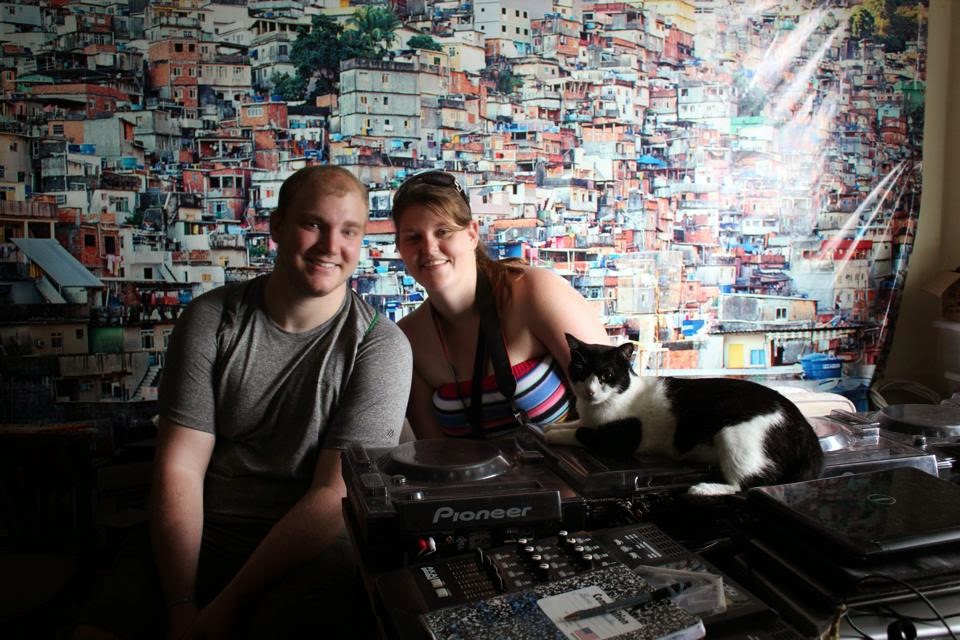 Fuzzy posing with some of our guests. 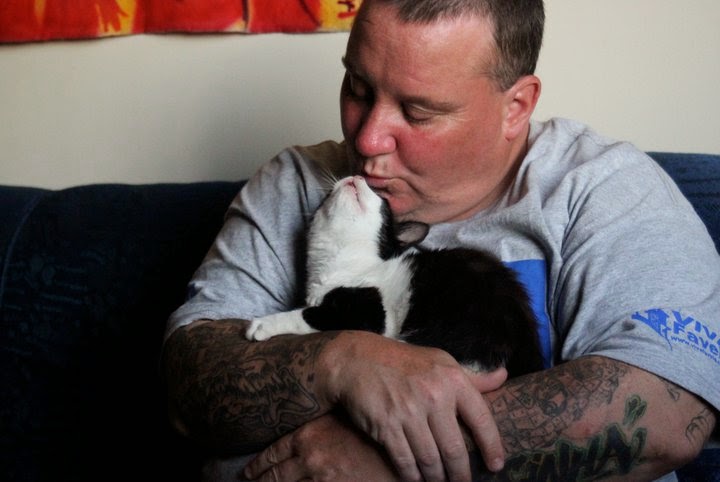 My little buddy, Fuzzy, you have passed on but will never be forgotten!  Thank you to all the people who have supported me in this difficult time.

Fuzzy's final resting spot at the top of Rocinha in an area called Laboriaux. I want to thank my friend Jody for burying him in this special spot! 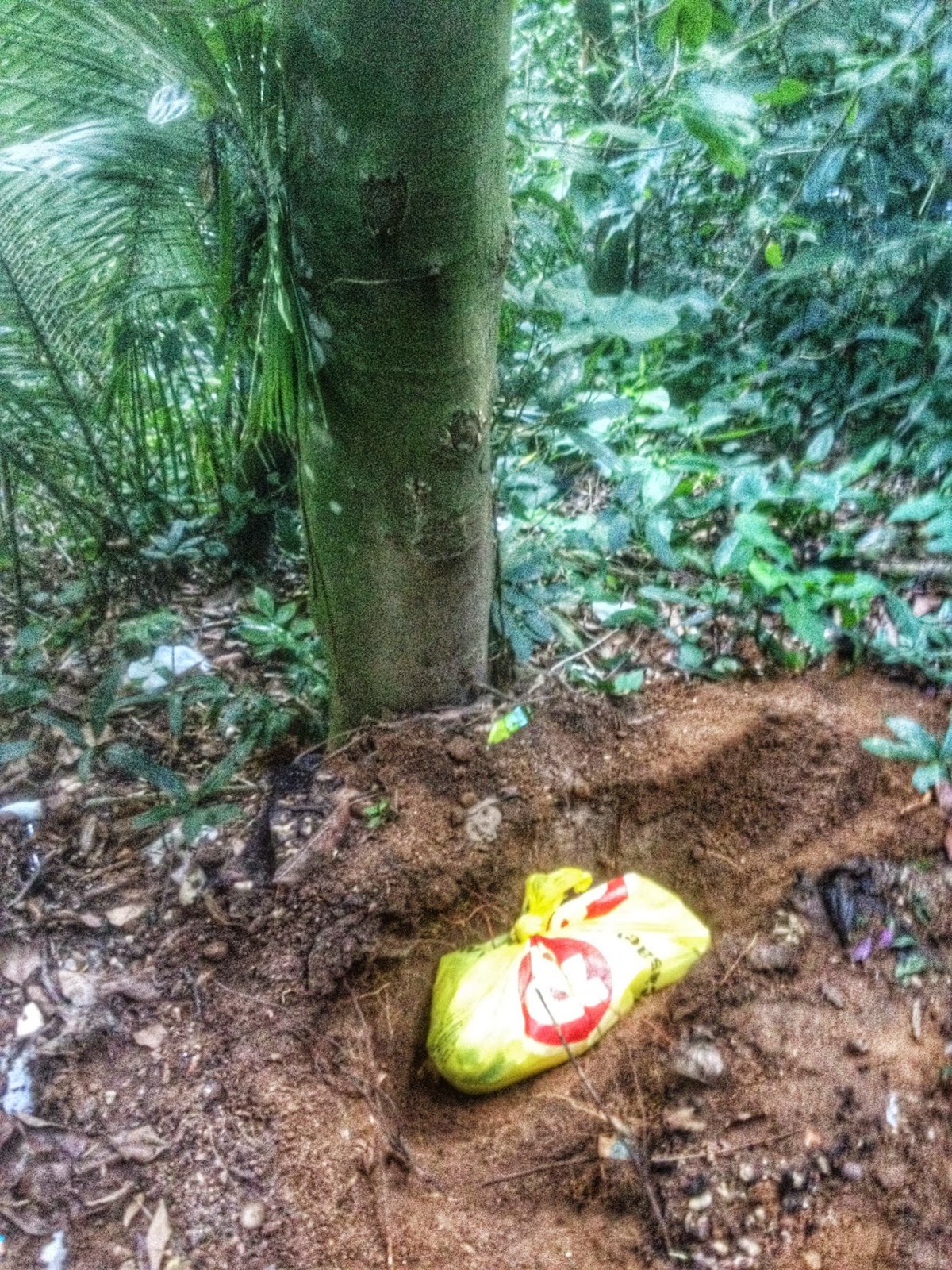 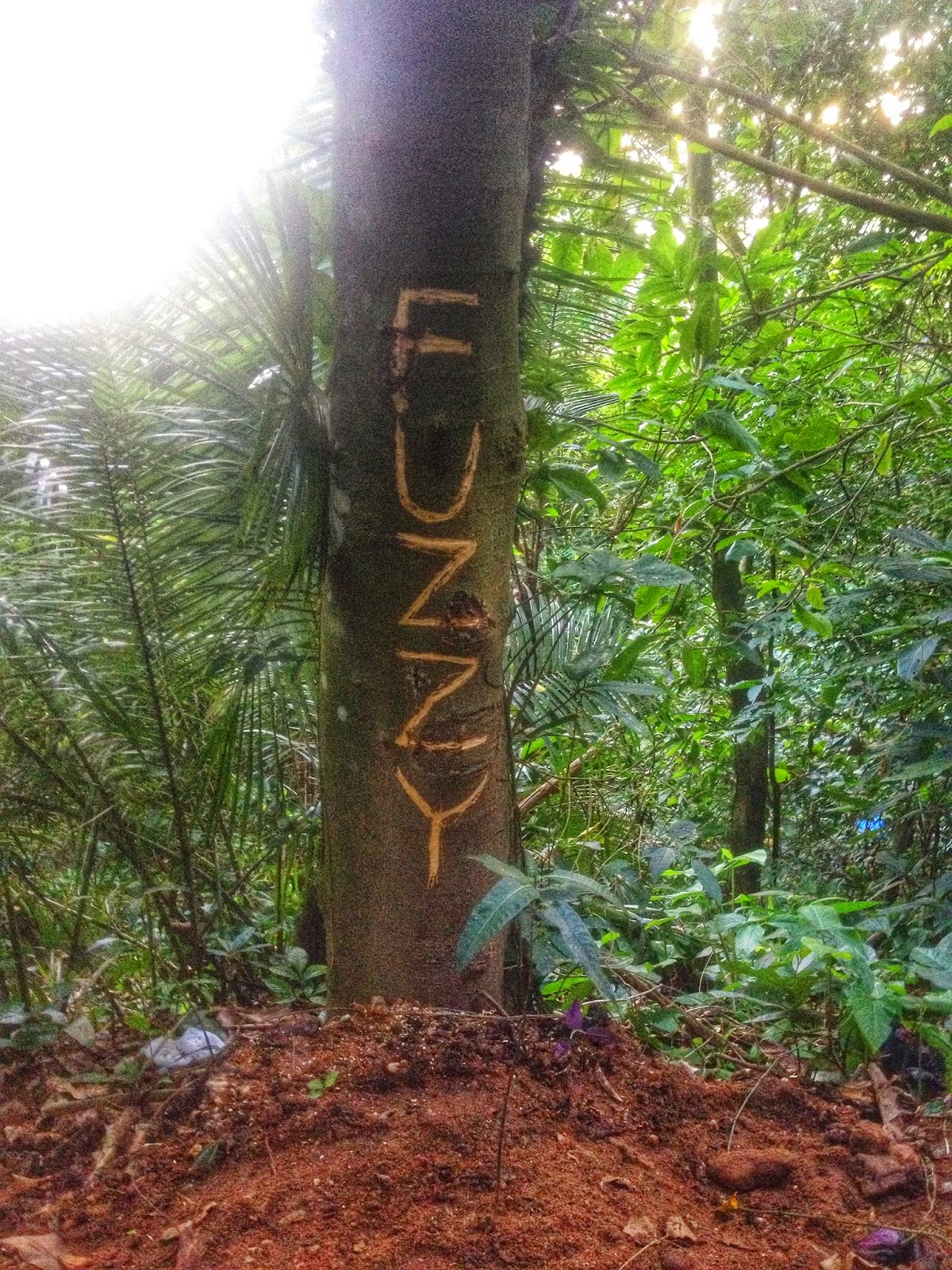 Jody King's favorite foto of Fuzzy. Hanging out in the Dj School on top of the turntables! I love you Fuzzy! 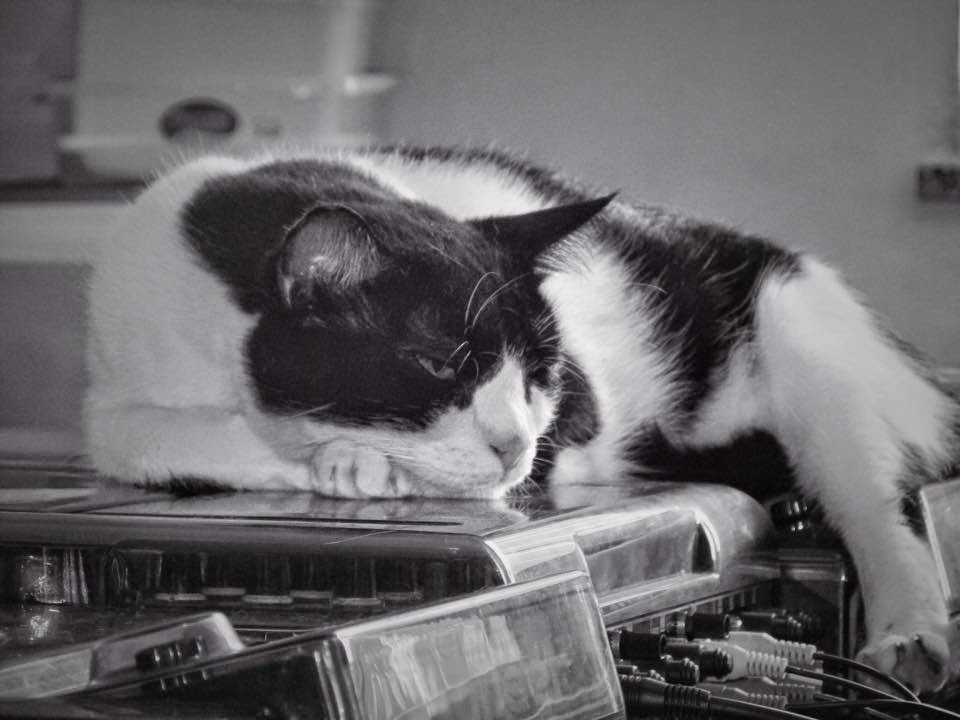