The Olympics for whom? 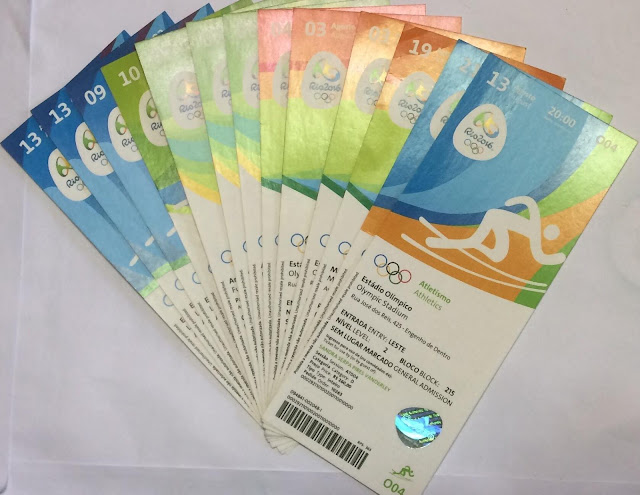 This is a photo, I found online on a facebook page that was offering tickets to buy, sell or trade,  during the games. If you look closely, these tickets are middle level priced tickets going for 260 reais for Athletics, general admission, which basically you arrive got to the section and area designated by the ticket and choose your seat. The price of this ticket that you see on top is approximately 30% of what the average favela dweller earns in a month. So the games we really only accessible for the middle and upper classes.

It all started as a big question, would the Olympics be a success or would it flop? Everyone in the media was fearful of Zika, terrorism, crime, water pollution. I had clients cancel meetings with me because the feared Brazil and the negative media. I heard stories of athletes cancelling their participation in the Olympics because of their fears.

This was the first time that South America and Brazil has hosted an event of this size other than the World Cup in 2014 and the Military Games in 2013. We all heard then too, problems with getting the stadiums done on time and crimes statistics. Yet somehow, not perfectly, the World Cup came and went with few problems. Brazil somehow pulled it off.

We who live in Rio know the problems that exist here. There has always been corruption, crime and problems with infrastructure. This is nothing new. So nobody in Brazil is surprised with the media’s reaction to when Rio received the games in 2009. Many news channels like Fox (from the US) and other countries mostly had negative things to say as to why Rio wasn’t deserving. Considering Chicago put in a bid for the games but the residents voted a big “no”, I find this ironic.

I have mixed opinions about the games. Brazil needs help in many areas like improving education for the masses. Healthcare is very poor, especially the further you go or from the city center. The people who are most affected by these poor services are those who live in favelas.

I live in Rocinha, the largest favela in Rio with approximately 300,000 people. We who live here experienced a different Olympics. Ours was from watching the tv screen. I knew very few who went to events and those who did were given tickets by volunteers or they were given out by representatives of the games to specific organizations.  Some residents were able to volunteer which gave them access to see some of the games. Towards the end of the games, free tickets were given out to but obscure events like Archery or Equestrian sports but certainly to no Brazilian popular sports like Football, Volleyball, Swimming, Judo or Athletics. Some who got tickets even tried to sell them with little luck.

I was able to go to an event, table tennis because of a friend who invited me. Otherwise, I would not be able to go. Tickets for Olympic events were very expensive. It was nice to be part of this experience but while watching in the stands, I could not help think of those in my favela who would never get to experience this. How many times does an Olympics ever pass through the city you live? Rarely, If ever .

Rio was able to clean the ocean water to acceptable levels for the swimmers, there wasn’t any bomb threats or heavy violent protesting as some expected. It was far from a perfect games but I think on a scale of 1 to 10, I would give Rio a 7. There were problems that I heard from friends, disorganization of people trying to get tickets through “CoSport”, long lines (I guess to be expected), and in the beginning transport to and from events was a little bumpy. There were a few cases of people getting things stolen like a German couple who had just arrived in Rio, went straight to the beach with all their luggage only to have it stolen upon return from a swim. There were other cases of pickpockets and stuff going missing. Not like any other big city problems during an event so large.

The future is now looking at the spending and the city, where do we go from here? Will the government invest in education for everybody or will everything stay the same? How about healthcare? And conditions in my favela, will they improve? Most likely not.  Should Rio have been host to these games? I think not, but I don’t make those decisions. I am just a simple favela dweller who has no power in these decisions. All I can do is still work to help improve my own community from within like most of us have been doing all along. We don’t have high hopes that the system will change much. The only positive note I heard from fellow residents is that Brazil’s football team redeemed themselves against Germany in the final game to win the gold medal. Too bad gold medals don’t, feed, educate or house people in need!

Posted by lifeinrocinha at 5:49 PM