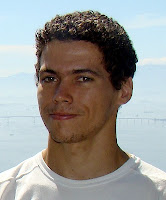 Bruno: "For me, who wasn't born in the middle of the jungle, I'd think twice, or even more times, before going there just to "walk around and get to know the place". I don't need, I don't want to know a Favela. My curiosity in favour of that is the same as about the Amazon jungle. None."
Ok here he is just saying his opinion of not having a desire to go there, ok, no prob there. But the fact that he still is using the word jungle when we all know he is referring to the favela does show his discrimination against the favela and its residents. So by his not wanting to "know a favela", he will never be open to changing his idea that there are good people there too. His mind will be stuck forever thinking the same way..sad! Maybe is he got to know some of the people there, he would then realize that the people there are not ALL criminals. I consider myself a good person who lives a honest life, I do not drink alcohol and never use drugs. So, I take his remark in not wanting to "know a favela", that he would have no interest in knowing me.

Bruno: "Just for a thought: ask a Yankee who was born in Manhattan, if he would take you to walk around the Brooklyn, or Bronx."
Here he mentions not only the word "Yankee", which is offensive to any American, but includes
places he has never been as an example of prejudice too. I wonder what the people of the Bronx or Brooklyn would think of this guy prejudice against their neighborhood? I have been to the Bronx and Brooklyn and I am sure there are areas that are more sketchy than others, I never felt fears when I was there.

Bruno: "To conclude my opinion, I'd like to ask people who live in a Favela, specially for those who were born at: if you were born at somewhere else, would you really take someone to a Favela Tour?
Zezinho, I honestly think you are happy living in there, and I'm glad you feel that way. For all the people that think like you, I feel happy. And I respect that. I truly do. Again, don't get me wrong here. If you think you got the wrong idea, please reread this whole text over and over. But just consider others' opinion as most of us consider yours."
Dude, you wrote offensive, bigoted, prejudiced comments about people and places that you have even said that you have never been and have no interest in knowing! This is the place I live and you just made it sound like I am in a jungle which I feel I am NOT. And that everybody around me is like somebody waiting to kill somebody..Then you try to be all passive with me after equating my neighborhood to being a jungle full of wild animals just waiting to attack.
This guy is an ignorant and as long as this attitude persists, racism, prejudice and bigotry will continue to keep Brazil a third world country!
I think the thing that is more upsetting to me is not so much this guys attitude (I think amoung the Brazilian Middle class this is so common) but that Couchsurfing would allow this kind of prejudice to be posted publically especially in this day and age.
Posted by lifeinrocinha at 10:21 PM