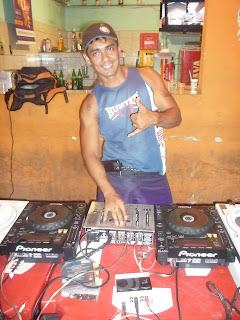 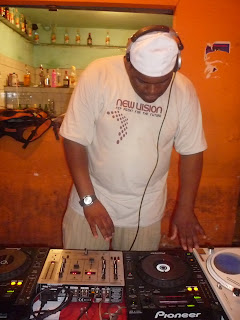 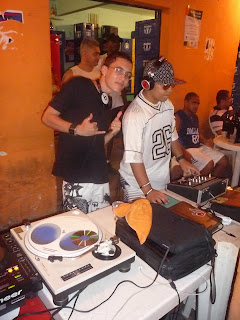 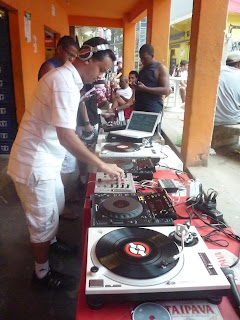 Jan 20th Patrick Alves organized a meeting of dj's in the favela. Over 25 dj's from the comunity showed up and took their turns playing for about 30-40 minutes..Every Sunday they have a pagode party on rua nova or the new street from 6pm until midnight..we met on a friday afternoon at 4pm and various dj's got to play everything from hip hop, funk, pagode, top 40 and anything else you could think of. The place where we played was in front of a bar so our crew attracted a lot of attention and music always brings out many people from the favela. I am sure the bar was happy.

I brought my cdj's and patrick brought turntables, mixer and speakers. The bar hooked us up to electricity to get us going. Big shout outs to Patrick for organizing this event, Dj Markao de Charme, Dj Bola, Dj Fernado Nere, Sem Terra, Dj Ramon and many others. We are planning another one very soon..

I want to thank all the tourists that I received in january and february as witout you, this dj school would not exist. I was able to buy some nice speakers for the school. We are growing the school slowly with students and equipment. Eventually it would be nice to have a sponsor for equipment so I can use the money from tourism to buy a permanent location for SPIN ROCINHA..
Posted by lifeinrocinha at 9:44 AM 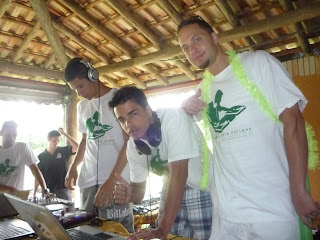 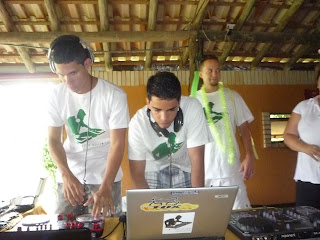 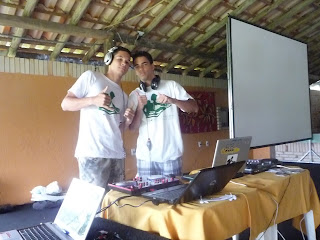 Our students finally had the opportunity to play outside the favela. Garyt Lineback a mutual friend, works for VALE, a mining company and the second largest company in Brazil.

So, on 12th of November 2011, we met at the bottom of the hill at 12 noon, Vinny. Johnathan, Ariel, myself and Garyt to head out to some far off place about 75 minutes out of the city of Rio. It was a sitio out in Recreio dos Bandeirantes. A BBQ party for middle to upper class brazilians to be dj'ed by students from the favela.

This is good exposure for the students to get used to playing in front of crowds. About 1 hour after we arrived Andre our 12 year old student arrived with his father on the back of his fathers motobike. Everybody got a chance to play various styles of music and to show their skills.

Vale also made donation of rice, beans and other foods to give to projects we have in the favela. I gave some to the kids to bring home and to the daycare just on the otherside of my street. I want to thank Garyt and Vale for having SPIN ROCINHA to play their party. I hope this is the begining of great things to come for the students of our dj school..

***a sidenote...the day following this party on 13 of November, the armed forces and over 3000 police took over the slum without a shot fired. Still a shocking thing for me to watch at 4:09am military tanks and men in fatigues with big military assault rifles roll by my front door..
Posted by lifeinrocinha at 9:31 AM