A Day of Violence 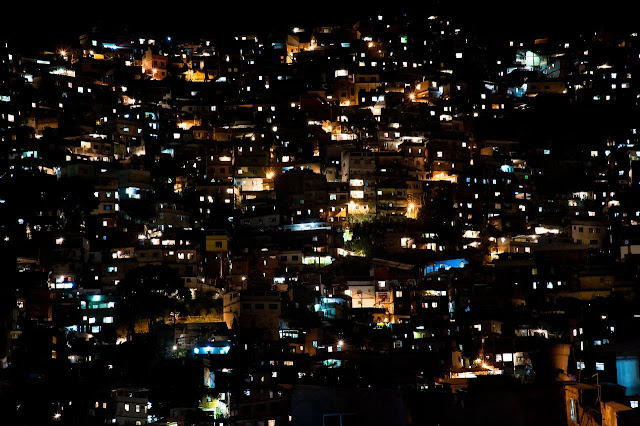 Rocinha now night time after a 6 hours intense shootout between dealers and police.

Living in Rocinha has a great things but sometimes the bad days happen. This morning at 5:30am, when the full on police brigade decided to make an "operation". Life is complicated here and with the UPP forces it can complicate things more. The things I will say following represent my opinions based on experiences of living here. Everybody can say what they want but unless you live here day to day, you really don't know our reality. Its easy to say "oh well you should do this", or "they should do that". Easier said than done in a complex problem that exists in my underdeveloped countries and especially areas where poor people live.

Its easy for those on the outside to blame the poor for their situation. Or just say, that they are lazy. But its far more complicated than that. Without education or opportunities, people who are poor will have little chance to escape their situation. And saying "If you only work hard, you can better yourself", is false. I see people everyday in my favela "Busting their asses", but they are still poor. I see many kids studying, getting good grades, but still unable to break free from the cycle of poverty. There has to be something more.

The fact is that the government of Brazil does not invest in their populations. Or I should reword that to say that the government only strives to keep the elites in power and keep the "masses" under control by not providing equal education or fair wages to workers. Its easier to keep people ignorant and only thinking about novelas or football. Its a distraction from solving the real problems that exist here.

Its ironic how the upper classes complain about the favelas, yet we are a convenient source of labor for them. Without us, the cities' service industry would die. Think of that the next time you get in a taxi, step on a bus or go in a restaurant or supermarket. Where do you think the people who serve you live? Its crazy but the person who serves you earns between 800-1200 reais a month. In Rio, those wages, you can only afford to live in a favela. Keep the peole ignorant, pay them little and oppress them by forcing them to live in areas of risk.

Favelas are places where people who live, are much like you. They have hopes and dreams and only want better for their lives. The majority here are workers who just want to get on with life. In every community you have bad people. This is in every social class. Everybody in the favela wants to live in peace. The problem starts with the value of a piece of paper called "money". In order to live in most societies, you need this paper to survive. Most find honest work to earn their paper. But some who lack opportunities or education may end up stealing, killing or doing other bad things to get this paper. In Brazil, its common knowledge that there is corruption almost everywhere, from the bottom to the top of society. Even though people talk or say they believe in a "god", they still resort to breaking the law or hurting others to get what they want. Hipocritical, I think. And rarely do you see any kind of charitable work come from upper class Brazilians. Its usually the foreigners that care more about the poor here than anyone.

When it comes to the favelas where the poor working class live, its an area that is under serviced and public services and not of the same quality as outside of these communities. People who live here often deal with limited electricity or lack of water distribution. Education is so poor that very few graduate secondary school, usually because they need to find jobs to help support the family. I only know a handful of residents that have actually graduated high school and gone on to university. Even if you get top grades in high school, this does not mean you will go to to college. So, the future for many young people is to follow in the footsteps of their parents by working in the service industry. I don't know what to say to the child that tells me his dream is to be a doctor or her dream is to be a vet. What do I tell them? I know that this becoming a reality for them is rare and very unlikely because of how the system is set up. I love Rocinha but its a place of little hope of a better future for many who live here.

So, today I was reminded of the sad reality of so much negativity mixed together, gun shots, police in all black ready for "war", armoured vehicles, fireworks, bombs. All of this woke me up a 5:30am. The police decided to make an operation  to recover drugs and arrest drug dealers. No warning, just come in and shooting at will. Of course it takes two to contribute to this. The dealers are responsible as well.

So early in the morning waking people up. This being the worst time as people are leaving in the morning to go to work and children are being sent off to what little schooling they have access to. Why? Favelados are not seen like the outside. We are seen as thieves, drug dealers, bad people. So, police use a heavy hand on everybody because they assume we all support criminal behavior. But yet the police enforce criminal behavior by shooting at "anything" that moves, even innocent children. These actions are supported by the government because whenever a innocent person dies, the police NEVER get punished. Or if police do get punished the serve a minimum time and get out early. If a 7 year old is shot and the first thing the police want to claim is that this child was a drug trafficker. Nonsense, this kid got shot because he was "in the way". We have about 250,000 people that live here and only about 150 people are involved in drug trafficking. As said earlier, most who live here are good people who because of low wages have no other option but to live in a favela.

Here is a video of what transpired this morning starting at 5:30am until about 12:30pm. Or this video.

And some fotos from various people in Rocinha. I preferred to stay inside today any way because I had much work to do but I did go out later to meet friends for Sushi at the bottom of the favela.

I am not an expert, social worker or anything. I am only a resident who would like to see this situation change. There has to be a better way!

Some fotos from todays Police operation 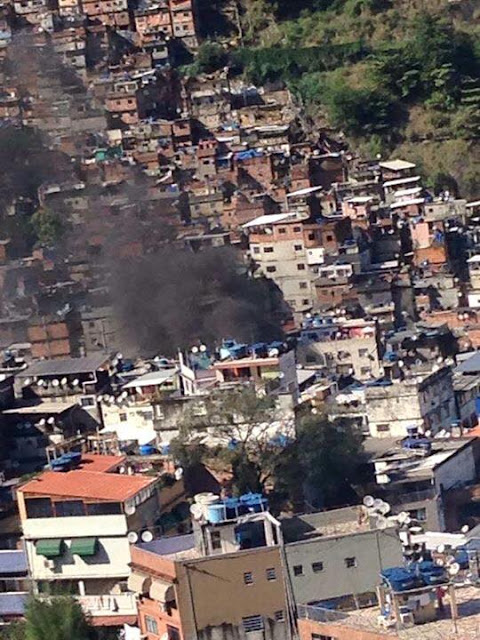 Smoke rising from Rua 2 a combination of fireworks, bombs and things lit on fire. 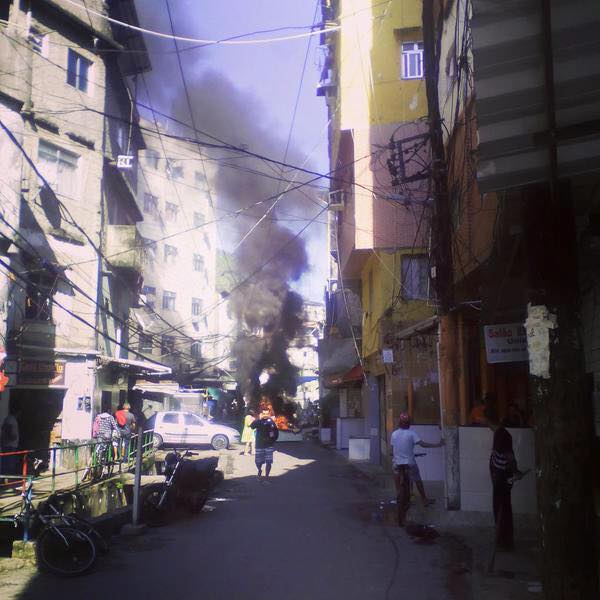 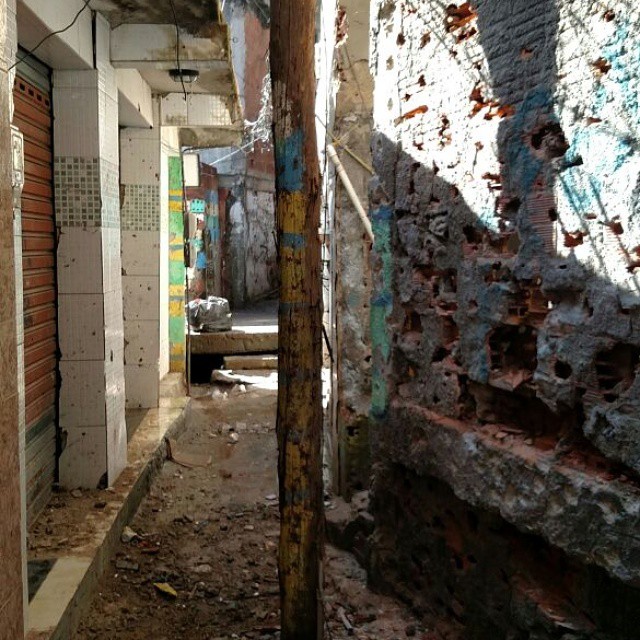 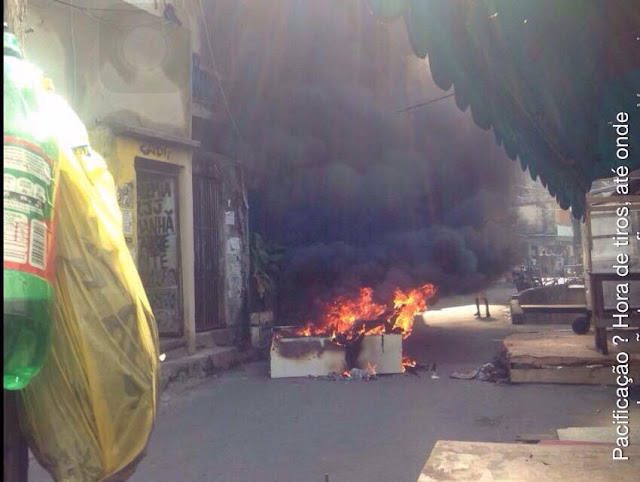 A sofa was lit on fire by drug traffickers as a distraction. Location: Valao 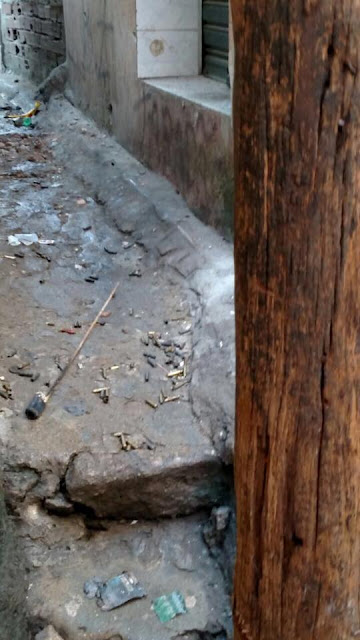 Bullet casings from all the gun fire and a spent bottle rocket. Location: Rua 2 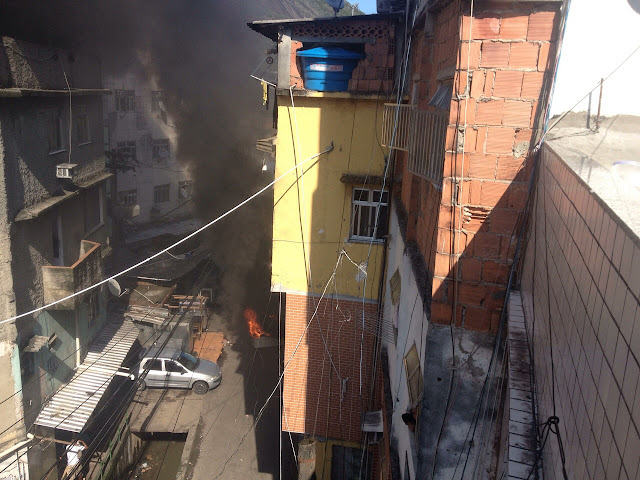 A view from above, the sofa on fire. Location: Valao

Posted by lifeinrocinha at 7:57 PM