The Benefits of Tourism 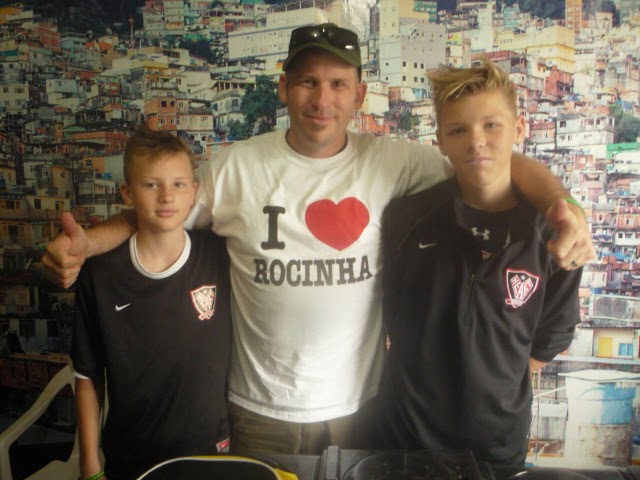 Through the last almost 8 years of working here in Rocinha, I have had the opportunity to meet some amazing people. People who care and want to help. Tourism has been very good to me but it has its slow seasons and busy seasons. I always need to put away money for the slow season to cover expenses. Many here think I am rich or make so much money, but the reality is very different. There are months I can earn 1,500 or busy months 4,000 a month. Saving becomes a priority. Our Dj school Spin Rocinha is our main project and priority as students need dj equipment, flash drives, headphones, CD's and for field trips we pay their expenses. But other projects need help and when there are opportunities, we try to help. Of course as our tours become more popular, we can then help more people.

When I have those months that I am able to earn more money, I go to the stores in the favela and buy school or art supplies for the projects that we support.
I have started to buy footballs when I have extra money. A decent football here in the favela can cost 20 reais. So, any donations of footballs are always welcome. Two months ago we were able to distribute about 30 footballs to different areas of Rocinha. The kids loved getting their own footballs to play with. A ball can change a childs' life.

Wade Berger and his friend Taylor came on one of our tours during the World Cup. He contacted me a couple of weeks ago connecting me with Brian King. Brian's son Ethan started a non profit called Charity Ball which distributes footballs all over the world to needy or poor communities. When Wade sent me a email saying that Brian, Ethan and his other son Jade were coming to Rio to distribute footballs, I was very happy about this. I know many children who would love their own football.

The start of the non profit is amazing. Brian has worked in some of the poorest areas in the world. In 2009 Brian went to Mozambique to help facilitate clean water to a poor area. Ethan who was 9 at the time went with his dad and brought a football with him. While Brian was working, Ethan developed friendships with the kids in the village and they played a lot of football. These kids never had the opportunity to play with a real ball before. When he left the village he gave the kids his ball. When he returned back to the USA he decided to start Charity Ball to try to get kids footballs in places where they dont have them. The idea is simple: raise money to buy balls to distribute in poverty striken areas. Donations of balls are also accepted. Just recently the company Johnson & Johnson donated over 500 balls to Charity Ball. Ethan has been able to give out about 5,000 balls since starting this charity in 2010 as a 10 year old.

Here is a photo of Ethan at 10 years old with the boys in Mozambique. 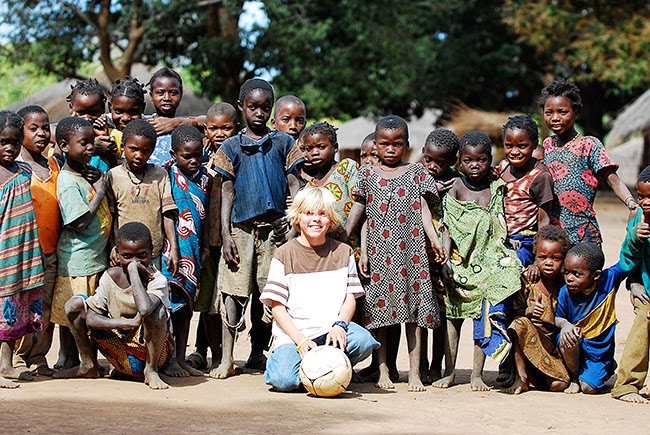 Ethan now15 years old,  and his brother 12 year old Jade are both football players where they live in Holland, Michigan. They both play competitive football. Ethan currently with Lakeshore Premier SC and has been asked to play on Michigan's 15 and under team.

Many people may ask if there aren't other ways people could help poor areas? Sure there are many things people can do. We each have our own way of contributing enjoyment to areas that desperately need it. I decided with the DJ School because its one of the few things I do well and I had many people in the favela wanting to learn to DJ. Ethan, with his love of Football (Soccer in the USA) has decided his way. So, When asked, why a football? I think its universal that a ball brings many benefits to the receiver.

Good question. Why invest in a soccer ball when there are so many other ways to help children? Consider the following:
I agree, watching the kids in the favela playing, keeps them busy and out of trouble. So, we set up a day, meeting place and time. Ethan being the face of Charity Ball has been in demand for interviews all over the work he is doing. He is now 15 and looks forwards to growing his non profit to help more people..

I met Brian, Ethan and Jade at the JW Marriot in Copacabana at 10 am today and we took the bus to the top of the favela. I had recruited some help from Obi and Sascha. Obi is part owner of Rocinha Guest House here in Rocinha. Obi born and raised in Rocinha, often works with us as a tour guide. He wanted to come along to help with the distribution of the footballs. Sascha is a student from the USA who is on a fellowship program with an interest in favela life. He is living in Rocinha and loves to work out and play basketball.

I had a set strategy in how to distribute the footballs. Brian had a rolling suitcase with 27 footballs and two air pumps. All the balls were deflated so he could fit more in the suitcase. We started at the top of the hill and slowly walked down. Because the weather was rainy, there were not many kids out on the street but I knew eventually as we got closer to the bottom, more kids would appear. In the past in giving out donations, I try to organize it to avoid a mob scene. You give out something, one kid sees it and next thing you know you can be mobbed by 100 kids. So, as we would walk, I would see kids and call them over to us asking if they played football. If they said yes, we gave them a ball. Obi, Sascha, Jade or Ethan would fill the ball with air and give it to the kid. The smiles on the faces of these children were priceless! Brian asked if he could take photos as this is part of transparency. Like my non profit, if I receive a donation, I like to document through photos who received it (In my situation, i usually write a blog post about it). People who donate want to see that their contribution is going where its supposed to go!

I knew of one area where there would be more kids. There is an area where we were able to set up the suitcase and fill some of the balls with air. At first there was one kid, within 10 minutes 3 other arrived so we gave all three balls and photos were taken, hugs and handshakes too. We moved on to the "Pracinha de Roupa Suja", which translates to "the little square of dirty clothes". There is a football pitch where they play "Futsal", which is similar to Indoor Soccer in the USA. We found 4 kids there that we gave balls to and then a game of 3 on 3 was played. I could see that this is the joy of every kid like Ethan, Jade and the kids from Rocinha. I dont know what the end score was but it was close. The kids were so happy. It was like giving kids gold..smiles all around. Pictures were taken and friendships were made. We left to give out the rest of the footballs up on the pasarella. The guys had to be back on the bus by 2:15 to get to Copacabana for another meeting. What a day! They have said they want to come back and I know Rocinha will welcome them back with open arms.

I want to first off than Brian, Ethan and Jade King from Charity Ball. Obi and Sascha who helped facilitate this wonderful project. Without the sponsorship of Johnson & Johnson, Rocinha never would have received such a wonderful gift. And finally to The Bar 90, Heart  Soccer Academy and Continental Tire for their contributions. ROCINHA THANKS YOU!!!!!!!!!

See some of the photos from our day! 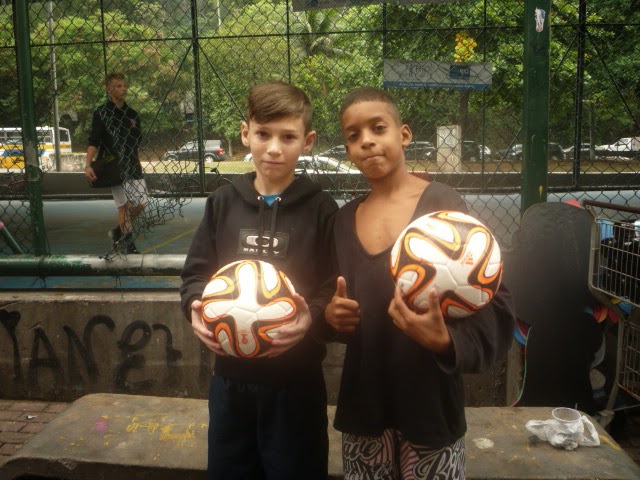 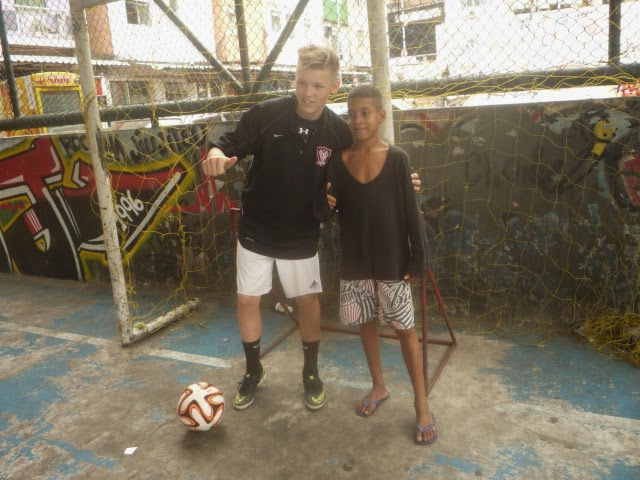 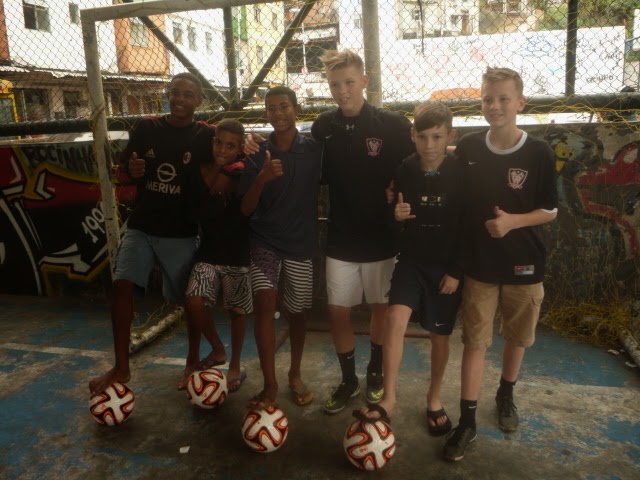 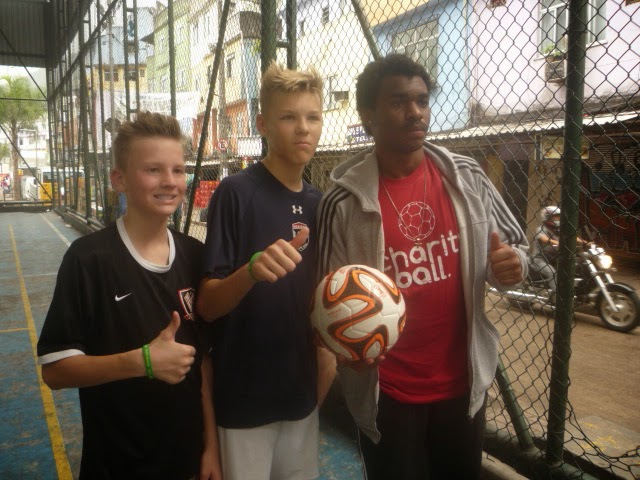 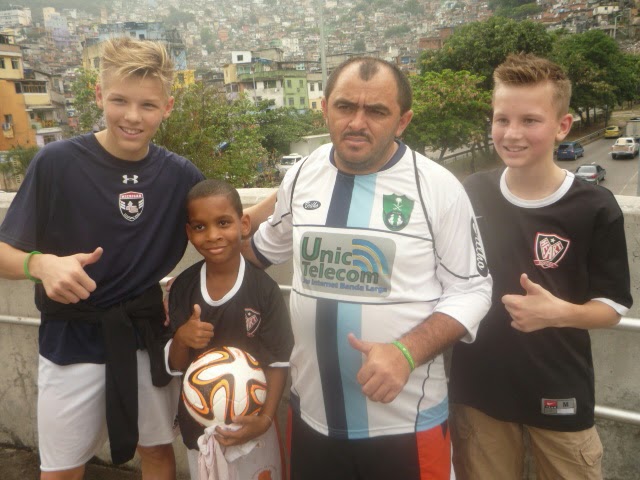 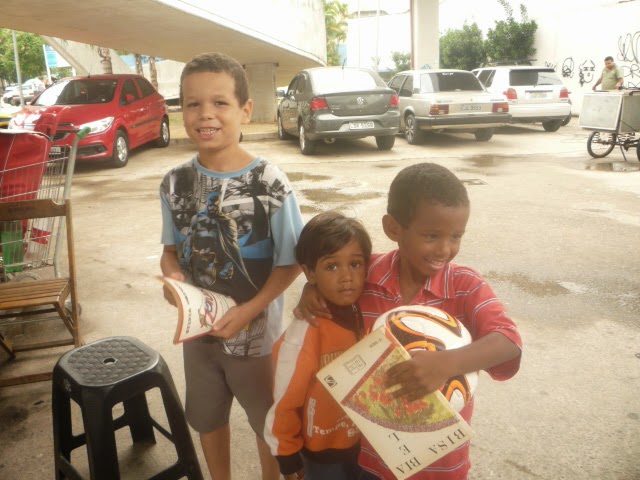 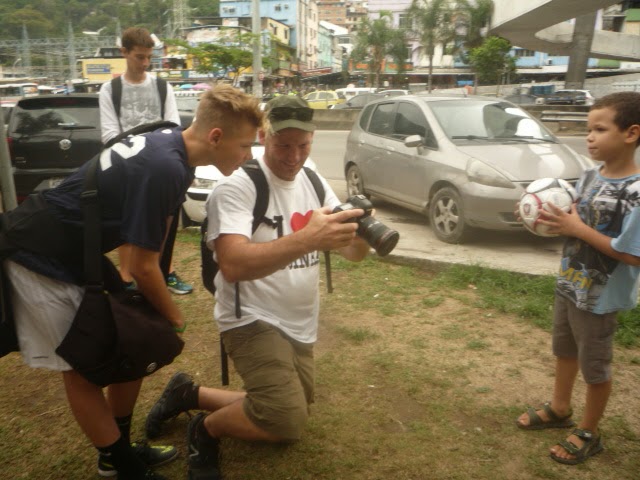 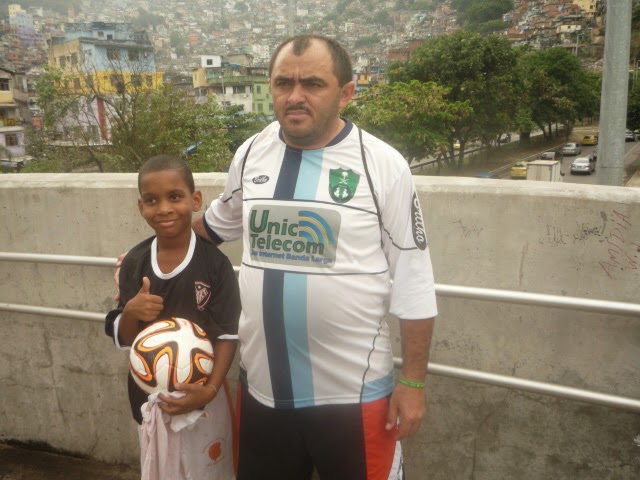 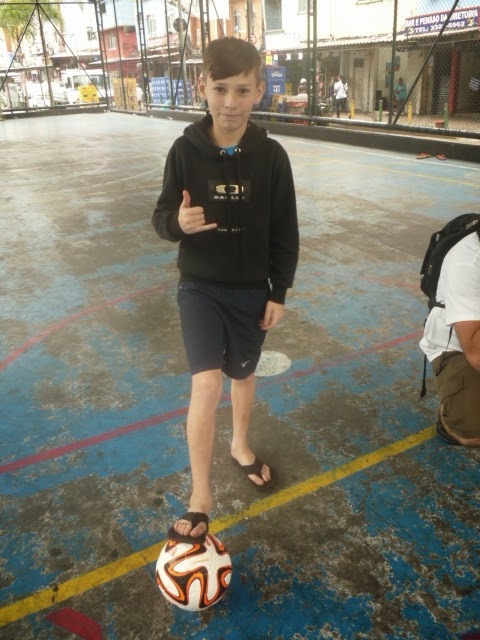 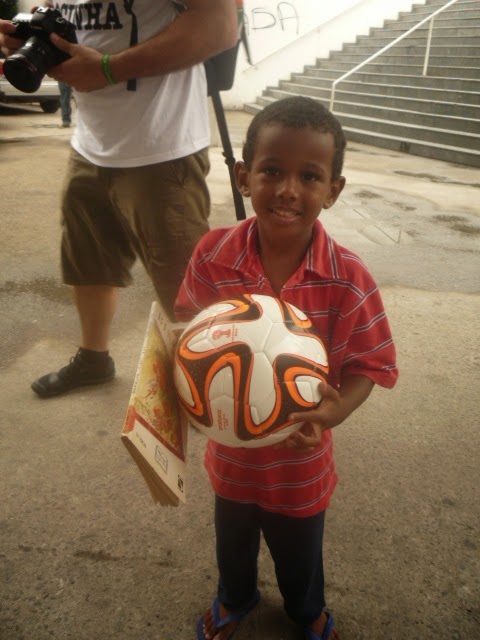 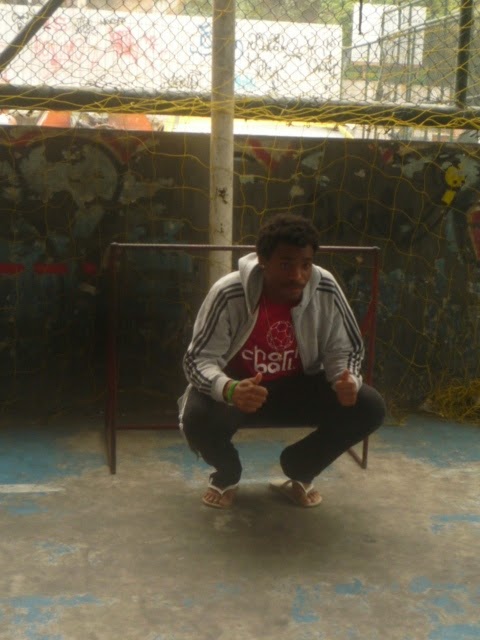 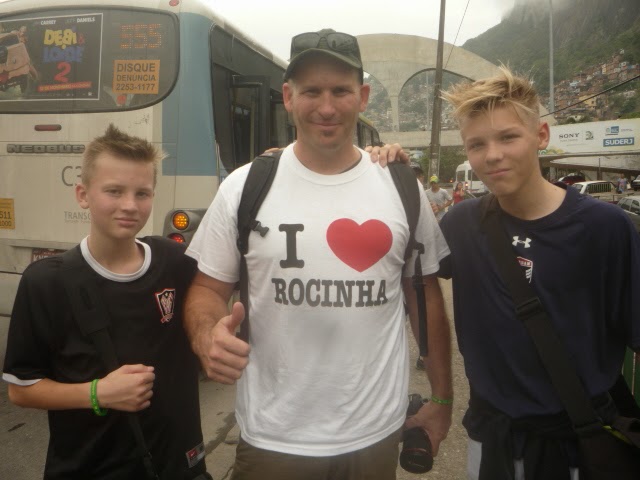 Posted by lifeinrocinha at 3:27 PM