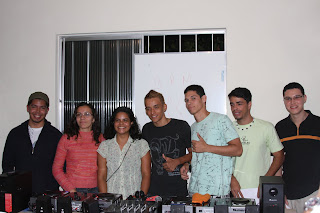 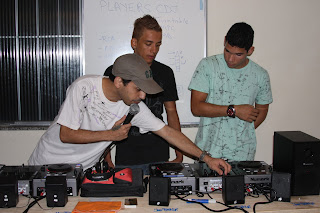 For over 10 years, I have had people ask me to teach them to dj. I think that everyone who is a dj has had friends ask them to teach them. Dj schools are rare and most dj’s are self taught. It starts out as a love for music, then getting some tables in your bedroom and practicing. Depending on your skills and desire, some venture out into playing in bars or clubs. Almost all of us at one time has done the family party or wedding. Putting your time in on the decks has its perks. For me it was being able to play in front of a crowd and gain experience. I had the opportunity to play a lot outside of Brazil too, which was great. I played mostly Brazilian parties and funk music was my love. My home for about 8 years was San Francisco so I had the opportunity to play in many clubs there. I will never forget the “Underground”, “Pink” and “el Rio” as some of my home clubs.

So, out of all of this, about 2 years ago I decided that I wanted to make something special here in Rocinha. There were many people in the favela that wanted me to start a English school but for me, I would rather start something that is my passion. There are already English schools here. I started asking people around the community if they were interested. Many showed interest, then I decided to research about how I was to do this. I had told many people from facebook my idea. Everybody said go for it.

About 5 months ago a Dj Phi Pham, from New York contacted me about the dj school and said they wanted to be a part. I told them about my contacts with dj’s here and our plan to have free classes. But I needed help with equipment. Electronics here are very expensive, probably close to triple what the costs are in the United States.

During this same time many more people were interested in this project. Harry Daley a dj from Canada, had contacted me after reading my blog and I put him in contact with Phi in New York. After a few months Harry took a trip to New York to meet Phi and talk about their project called “Building Beats”. Their idea is to help fund dj/music projects in poor areas.

I had some equipment but had to find a way to get more. If we are going to have a good school, we need enough equipment for people to practice on. Ryan, a friend of mine from San Diego put me in contact with a woman who was interested in projects going on here in the favela. I met Lea Rekow one day while showing her Tio Lino’s art school. After seeing the art school, I told her about my idea of making a dj school. She became interested and we started meeting and talking about organizing how we would do this.

She has much experience in doing this kind of thing. Her experience covers many areas including film making and curating large art shows in New York. We set the plan in motion. My job was to find a place to have the classes, find the students, advertise in the favela, buy the notebooks, the white board and host Ryan and Harry for a month. They both brought dj equipment down with them. Lea had friends who donated equipment, website hosting and development. We have both put in a lot of time to get this project off the ground.

We had our open house on August 1st and started the classes on August 15th. We have classes every Monday and Wednesday for now. Eventually we will expand when we find a new space. For now, we are running the school out of my living room. This is just temporary until we secure a good location. The classes run for about 90 minutes. We have nine students that include 6 guys and 3 women. The ages of the students are from 13 up to 34 years old. I absolutely love this project as it is off to a great start and already we are getting interest from other residents who want to take part in the next set of classes.

In order to expand we are always looking for new/used equipment. Lea handles all monetary donations. So, if you have interest to help us expand the program you can contact Lea at info@rocinhamediaschool.org

Below is a video on youtube of our Open House that happened on August 1st, 2011
http://www.youtube.com/watch?v=YjodZv-31iA
Please cut and paste into your browser as I have no idea through this blog how to make a link..
Posted by lifeinrocinha at 11:09 PM